75 villages protest government decision to give their water to Pune

THE three-year-old peaceful protest of Mavla taluka residents against the laying of a water pipeline turned violent on August 9 when three farmers were killed in police firing. Residents of 75 villages of the taluka in Pune are angry over the Maharashtra government’s decision to lay the pipeline from the Pavana dam in the taluka to the pumping station in Ravet, under the Pimpri Chinchwad Municipal Corporation (PCMC).

This, they say, will deprive them of the water from the Pavana river. Protesters had blocked the Mumbai-Pune Expressway for six hours when the police fired to disperse the crowd. The decision to construct the 35.85 km pipeline was taken anticipating severe water scarcity in Pune by 2031. The project, funded under the Jawaharlal Nehru National Urban Renewable Mission, is scheduled to be complete by March 2012.

“There is sufficient water to cater to people’s needs,” says D V Morankar, section engineer of Pavana dam. At present, people use around 4,000 million cubic metres (TMC) of the river water. Even after the pipeline is laid, 4.5 TMC will be released to the river, he says. Residents doubt this. 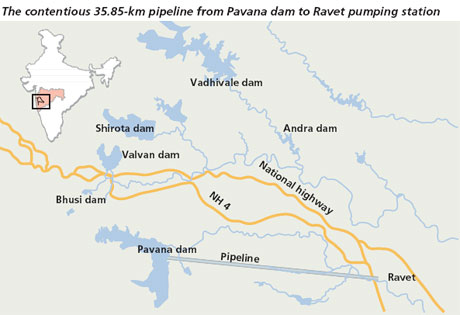 The total capacity of Pavana Dam is 10.5 TMC. Of this, 2 TMC is dead storage considering siltation and evaporation, and 1.1 TMC is reserve storage, must for a dam at any given time. “Of the 7.4 TMC left, 6.5 TMC will be supplied to the PCMC pumping station,” says Ramesh Kalekar, a farmer. The dam will be left with just 1 TMC water. “How can it cater to people of 75 villages with so little water? We depend totally on the Pavana river for water. Once the pipeline is laid nothing will be left in the river for us,” he says. Kalekar had lost 1.4 hectares to the Pavana dam in 1972 and is now left with less than half a hectare which is threatened by the pipeline.

In 2008, angry over government’s decision to lay the pipeline, Bharatiya Kisan Sangh (BKS) had moved Bombay High Court. But the court refused a stay order after the irrigation department gave an undertaking that Mavla taluka will not face water shortage. The water resources ministry acquired 29 km land and on July 15 started work amidst huge police protection.

Farmers now suggest that instead of taking all the water from the Pavana dam, government should distribute the load to the six dams in Mavla taluka—Valvan, Bhusi, Shirota, Vadhivale, Andra and Pavana. “If the government explores this possibility, it will help everyone living near Pavana,” says Balasaheb Pingle, a BKS member. He wonders why the pipeline was laid from Pavana when the distance from Andra dam to the pumping station in Ravet is much less.