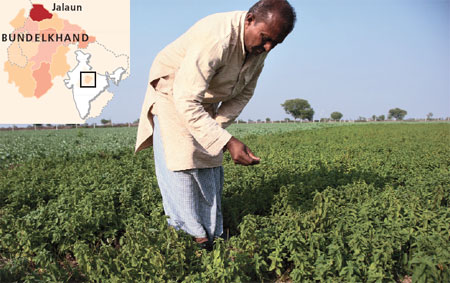 IT IS back to square one for the farmers of Jalaun district in Uttar Pradesh. Reeling under persistent drought from 2003-08, they were driven to mentha (mint) cultivation that promised good returns. Instead, it increased debts. Cultivation of this water-intensive crop is fast shrinking due to depletion of groundwater and no alternative source of irrigation in drought-prone Bundelkhand region of the state.

About 40,000 farmers in Uttar Pradesh have stopped growing mentha due to lack of water in the past three years. The worst hit are the farmers in Bundelkhand. The state government introduced mentha cultivation in the region in 2005 to help farmers earn more. “Given the persistent drought in the region, irrigation cost has gone up,” said Utkarsh Sinha of non-profit Centre for Contemporary Studies and Research (CCSR) in Lucknow. In 2009 the state produced 30,000 tonnes of mentha on 0.2 million hectare (ha), according to the Uttar Pradesh agriculture department.

A year later the area under mentha reduced to 0.15 million ha. Though there is no official data for 2011, the department estimates it would be less than 0.1 million ha. Laluram Niranjan, a farmer at Gadher village in Jalaun, rued, “Failure in mentha cultivation is inevitable.” He was one of the first farmers to take up mentha farming in the district in 2005.

With a large number of farmers in the district turning to the crop, he sensed a business opportunity and set up a mentha distillation unit at the cost of Rs 5 lakh. Now mentha cultivation is fast shrinking because of dipping groundwater level. “I am in debt,” he said. Niranjan has abandoned two hectares of his six-hectare mentha crop.

From surplus to deficit

Popularly known as Japanese Mint (Mentha arvensisvar piperascense), mentha needs 18-22 rounds of irrigation in 90 days. It takes 0.1-0.125 million litres of water to produce one litre of mentha oil. Farmers in the region first exploited surface water sources. Once they dried up, the farmers installed handpumps for tapping groundwater. This increased the cost. A study by CCSR in 2008-09 found that on an average a farmer had to spend Rs 42,885 per ha of mentha, half of which was on pumping water (see ‘Water guzzler mentha’).

Increased cost forced the farmers to bring in more area under mentha to up the profit. In 2009, about 80,000 more hectares were brought under mentha cultivation compared to the previous year. This had a twin impact. One, more production meant price of mentha oil came down from Rs 700/litre in 2004 to Rs 500/litre in 2009. Two, indiscriminate withdrawal of water led to drying up of handpumps.

The CCSR study conducted in 20 villages showed that within three years most of the handpumps in Jalaun dried up. It found that in 65 per cent of the villages groundwater had dipped by six metres. As a result farmers abandoned mentha on a largescale. “In my village of 5,000 farmers only 100 now dare take up mentha,” said Ajay Kumar Niranjan, a mentha farmer in Gadher. “Those who have water sources of their own can grow the crop but profit has reduced by 60 per cent.”

Bundelkhand is already highly degraded with 70 per cent of the land prone to erosion. “What worries us is the ecological impact of mentha cultivation,” said Sanjay Singh of non-profit Parmarth in Jalaun. High quantities of fertilisers are used for growing mentha. “I was not able to take up any other crop in the mentha field. The only alternative is to take a sabbatical of two-three years from farming,” said Ajay Kumar.

But can he? Slump in mentha production has hyped its price to Rs 1,100 a litre. He is tempted to grow mentha in a few hectares. “Something is better than nothing,” he said.
News News News Uttar Pradesh Soil Erosion Land Degradation Jalaun Groundwater Irrigation Farmers Farmers Drought Prone Areas Drought Prone Areas Debt Chemical Fertilisers Bundelkhand Agriculture
SUPPORT US