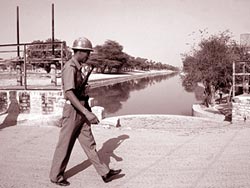 If we are doomed to witness water wars in the coming years, as many experts predict, they would perhaps begin thus. Four farmers were killed and about 30 were injured in police firing in Rawla and Ghadsana towns of Rajasthan's Sriganganagar district on October 27, 2004. They were protesting an alleged reduction in their water allowance from the Indira Gandhi Canal (igc). While defending the police action, the government denies any such reduction. It holds scarcity of rainfall, population increase and growing consumption responsible for the water crisis. But its explanations leave a few questions unanswered, and this is perhaps the reason why the farmers are in no mood to relent even after the incident.

The Indira Gandhi Nahar Project (ignp) transformed Sriganganagar district from a desert to a green area in the 1970s (see box: The U turn). But the farmers complain about decreased water supply in the past five years. They have suffered huge crop loss during this period. Farmers had been agitating to get more water from igc for almost a month before the police-firing incident. Frustrated at not being heard and to protest against previous day's lathicharge on farmers at Ghadsana, they attacked the Rawla police station on the ill-fated day. They also torched several government buildings and official residences. To contain the uprising, the police first lathicharged the protestors and then opened fire on them, killing two of them on the spot. One farmer succumbed to his injuries later. Not very far away, another agitating farmer was killed in police firing near Ghadsana.
"We were just asking for some water so that we could sow mustard. We are already late by 25 days, since the sowing should have started from October 5, 2004. We have been requesting the government for more water for the last one month but it is suppressing our demand," charges Brijlal, 58-year-old father of Mangelal, one of the deceased. But Rawla's police justifies its move, saying it had exhausted all other options. "We tried to control the situation by using tear gas and rubber bullets, but the mob went out of control. After using all options, we ordered firing when the mob tried to lynch a constable," says Raisingh Beniwal, station house officer at Rawla police station.


Curfew was imposed in Ghadsana, Srivijaynagar, Anupgadh and Suratgadh immediately after the incident. The army was called out. All weapon licenses were suspended and a judicial enquiry was ordered. The government also announced an ex gratia of Rs 5 lakh each to the next of kin of the four deceased and Rs 1 lakh each to the injured. But this hasn't doused the farmers' anger.
The igc gets the water of the Satluj and Beas rivers from Punjab's Harike Barrage, via a feeder canal. The ignp was divided into two stages; Rawla-Ghadsana area started receiving water in the project's first stage. The water allowance for areas in ignp's first stage is 5.23 cusec per 404.7 hectares and for those in the second stage is 3.05 cusec per 404.7 hectares. But farmers allege that the government has now made the water allowance equal for both the categories and that their share of water is being diverted. Prem Vishnoi of Rawla, a member of Kisan Sangharsh Samiti (kss), a protest group formed by the farmers, reasons: "Had we been getting the same amount of water as ten years ago, when I could irrigate my forty bighas of land, why would I have to irrigate only three bighas now? Our water is being taken to second stage so that government can sell its land. But we won't let this happen."

But Rajasthan's irrigation minister Sanwar Lal Jat rejects the allegation: "We have not made any change in water allowances. Some politicians are spreading these rumours to get political mileage." Shiv Charan Regar, executive engineer (regulations) at the region's irrigation headquarters (north) at Hanumangarh, offers an explanation for the crisis. He says the areas covered under the first stage of ignp were earlier getting all the water allotted to the project. But now the share of the areas covered under the second stage has to be given. Besides, "low rainfall and increase in command area and reservation of water for essential uses have contributed to the crisis," he says.


The ignp's main canal, which has a capacity of 18,000 cusec water, gets only 5,203 cusec water, according to the state's irrigation department. Rajasthan blames Punjab for this shorfall. "Punjab does wrong gauging at Harike barrage from where the water is released to igc. It doesn't give us enough water," alleges an irrigation department official. To resolve this issue, a meeting was held between the irrigation ministers of Punjab and Rajasthan in New Delhi on May 21, 2001. Rajasthan proposed to transfer the control of the barrage to Bhakra Beas Management Board, constituted to reconcile water accounts. But Punjab did not agree. And the water scarcity in the canal continues. What is worse, the essential water requirement of the area has risen to 2,070 cusec due to population growth. This leaves only 3,133 cusec water for irrigation for both stages. This is highly insufficient, especially because the command area, referring to the area under irrigation, has increased. The command area under ignp's first stage, which is divided into two phases, was 0.5 million hectares in 2000-2001. But the project is designed to irrigate only 0.38 million hectares. Though the command area decreased after 1999 due to water scarcity, it is still much more than what the project can irrigate(see table: Increasing command area). "Even if we irrigate only the first phase of stage one as per the allowance, we will need 7,602 cusec water. But we have only 3,133 cusec for both the stages," Regar says. In fact, the command area has been more than planned from the beginning of ignp (see graph: Poor water management).

But these explanations can't answer two simple questions of farmers: what is the government doing to fight water scarcity and why is it developing the project's second stage if there isn't enough water even for the first? "The government can't suppress our protest by killing or arresting us. Ghadsana and Rawla were just trailers," warns Bhupram Vishnoi, a kss member.