The aviation industry is working on producing two 21st century aircraft: the HSCT, which can cut flying time by half; and the super jumbo, which can carry as many as 800 passengers at a time. 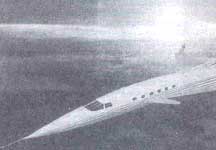 FASTER, bigger and more comfortable. That's how one would describe the commercial jets of the 21st century, which will be superlative versions of the supersonic Concorde and the gigantic Boeing 747.

While long-range, non-stop travel is on the increase, larger aircraft are needed to fly shorter routes so that congestion is reduced at busy airports. Therefore, a second-generation supersonic airliner, called High Speed Commercial Transport (HSCT), is being planned to replace the Concorde, while a super jumbo is on the anvil to meet the demand for larger airliners.

HSCT will be built using light-weight, heat- resistant materials such as ceramics and composites that can cope with the intense heat generated during the longer and faster flights. And, its engines will have to be much quieter to meet international noise regulations. But it will cut flying time by more than half: The Los Angeles-Tokyo route, which currently takes 10.3 hours in a Concorde, can be flown in a mere 4.3 hours in an HSCT.

However, the aerospace industry is worried about the forbidding costs of developing these advanced aircraft. The HSCT is estimated to cost $15 billion or more to develop, while the super jumbo will cost more than $10 billion. As no single company can afford such sums, efforts are underway to finance these initiatives through international consortia.

One such agreement has been reached between Boeing and Airbus to develop a super jumbo, which is expected to be a behemoth of an airliner capable of carrying as many as 800 passengers, with a business centre and gymnasium fitted in for good measure.