Fate of the tuskers

Should nations who have done well for their elephants be punished for improper management by others? 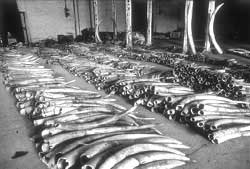 it was another of those meetings where delegates could not see eye-to-eye. The Convention on International Trade in Endangered Species ( cites ) of wild flora and fauna, held in Nairobi with 2,500 delegates from 151 nations, concluded on April 20, 2000, leaving many satisfied and as many disappointed.

Buckling under pressure from countries like India, Kenya and other developed nations, the four African nations -- Botswana, Namibia, South Africa and Zimbabwe -- agreed to delay the sale of their stocked ivory for at least two years. This was done ostensibly to assess the threat that poaching posed to the elephant population. Still, keeping open the possibility of future sales, the African countries have agreed to delay trade in ivory only till the next cites meeting to be held in 2002 or 2003. ( cites meetings are held every two years. The 1999 meeting was postponed due to political turmoil in the host country, Jakarta).

Limited trading in ivory waspermitted till 1989, after which it was entirely banned. However, at the 1997 cites meeting in Harare, the African countries were allowed to sell their ivory stock of 60 tonnes to Japan. As aresult, three populations of African elephants were downlisted to Appendix ii from Appendix i . (Appendix ii lists species not necessarily in danger of extinction but would become so if trade in them is not regulated. On the other hand, trade in animals and plants listed under Appendix i is strictly prohibited as they are highly endangered species.)

India and Kenya had greatly opposed this move. They claim that the resumption of trade in ivory has had a negative impact both on the African and Asian elephants and has led to increased instances of poaching since the ban was lifted. But African non-government organisations ( ngo s) point out that the decline in elephant population is due to improper management. They maintain that there has been no increase in poaching specially due to the strict control measures that were implemented once trading had resumed.

In fact, in the African nations, international trade in ivory has resulted in the introduction of 'conservation-based community development' programmes like campfire and the Chobe Enclave Conservation Trust of Botswana. Under these schemes, communities have earned revenues to nurture their wildlife resources and promote conservation work within their environment.

Moreover, and as stated by The Economist , the claims made by India and Kenya on the increase in poaching are disputable. It should be noted that a total ban on Asian ivory was imposed since 1976 in India (a signatory of cites ). Yet, the number of poaching instances did not show any decline.