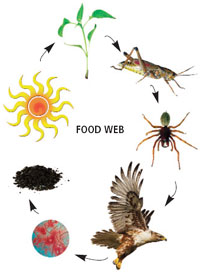 FOOD is the key source of energy that is transferred from one organism to another in a food web. To study the transfer of energy from one trophic level to another, scientists from School of Forestry and Environmental Studies, Yale University (New Haven), zoomed into the eating habits of grasshoppers.

Herbivores have a high demand for nitrogen-rich proteins for growth and reproduction. Under the risk of predation, their metabolic rates increase and demand shifts from nitrogen to carbon. Herbivores can store very little in their bodies and require plants with easily digestible carbohydrates to minimise the cost of ingesting and excreting excess nitrogen. Dror Hawlena and Oswald Schmitz studied the changing diets of grasshoppers undergoing stress from the risk of falling prey to a hunter spider Pisuarina mira. They reared two groups of grasshoppers, one in the absence and another in the presence of the spider. These grasshoppers were fed with artificial food of a known composition.

After five weeks, when respiration rates, body’s carbon to nitrogen (C:N) ratio and excreta of grasshoppers were analysed, metabolic rates of those facing the spider were found 40 per cent higher than that of the other group. The enhanced metabolism led to a higher demand for a carbohydrate-rich meal.

In field conditions, this alters the diet of the grasshopper, its body's C:N ratio and the composition of its its fecal matter. This changed the composition of animal and plant tissue, which entered the soil for decomposition. The study as published in the August 31, 2010 issue of the Proceedings of the National Academy of Sciences.

“Humans too can affect pathways of nutrient cycles and may cause stress to species, which in turn change the amount of different nutrients recycled in the ecosystem,” he added.

“If this study holds true for the large predator and prey as well, it will open up a new dimension to current conservation practices that involve introduction and maintenance of top predators in a confined area, said P K Joshi, ecologist with TERI University, New Delhi.