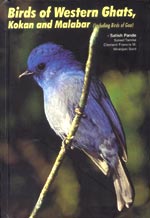 Dawn was yet to break at Avalanche when Clement Francis, a software engineer from Bangalore, dragged himself out in the freezing cold to photograph the Nilgiri flycatcher, a bird found solely in the evergreen forests of the Western Ghats. As the day progressed, the Nilgiri flycatcher would grow busier, thereby making a photosession a difficult affair. This was the reason behind Clement's early morning tryst.

Clement's commitment paid off, and the testimony, the photograph of the Niligiri flycatcher, adorns the cover of the recently released book -- Birds of Western Ghats... The book is a joint effort of four amateur ornithologists -- Satish Pande, Saleel Tambe, Clement Francis M and Niranjan Sant. It is a lavishly illustrated edition and makes a colourful splash with as many as 1,700 photographs. Around 150 amateur and professional photographers from India and abroad have contributed towards it.

The book includes pictures of some very rare and shy birds alongside information on the life history of more common birds from the Western Ghats. Some of the birds whose photographs have found a place in this collection are the violet cuckoo, yellow-throated bulbul, crakes, bridled terns (during courtship), purple-rumped sunbird (feeding plaintive cuckoo), white-browed bulbul and white-bellied shortwing. The book covers around 580 species.

This is essentially a birdwatcher's book, and includes natural history information well illustrated by photographs. The main text of the book deals with descriptions of a few species from every group of birds found in this region. For these select species the authors have outlined distribution, status, morphological (size, flight patterns, call and plumage variations) and ecological (habitat, food choice, breeding, nesting) characteristics together with their cultural associations. Though related species are described in brief, they are well illustrated by pictures. The notes and accompanying photographs on nesting and breeding behaviour of birds are a mine of information.

It is hoped that the photographers kept in mind the interest of the birds while obtaining these pictures. The status and distribution records provided in the book pertain largely to Maharashtra and even the local names provided are in Marathi. However, one feels that collaborations with birders (bird watchers) from other areas of the Western Ghats would have yielded a more comprehensive picture. Calls and identification cues, especially for birds such as warblers, pipits and waders should have been described with greater accuracy. The general chapters on birds and Western Ghats at the end of the book are poorly researched and the book lacks a bibliography.

Then again, while other popular bird-guides for India follow a different scheme of nomenclature, the authors of this book have included alternate English common names used by other books. This makes it easy to refer across books.

The book also scores quite well so far as the printing quality is concerned. However, the overall layout and editing leaves plenty of scope for improvement. The main text is peppered with numerous details, diverting the readers' attentions from the major focus of the book. Details on birds in postage stamps, Sanskrit names, rescue and rehabilitation of injured birds could have been compiled and presented as chapters towards the end of the book. Such chapters along with fewer, carefully chosen pictures illustrated by natural history anecdotes would have definitely yielded better results.

Despite the large number of colour photographs, the price of this no-profit publication has been kept low due to the generous contributions of funds and photographs. Despite this endeavour, this photo-guide remains beyond the reach of average birders, who would rather invest in regular field-guides for their backpacks. The book has a lot to offer to anyone interested in birds or bird-photography in the Western Ghats and the authors deserve praise for attempting such a well-illustrated bird-book for this diverse ecoregion.