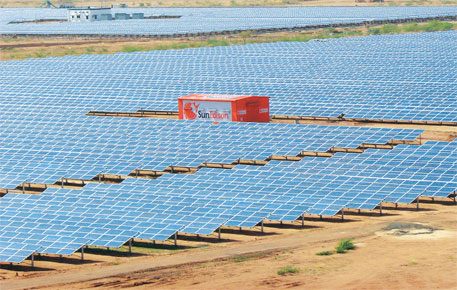 The Gujarat Urja Vikas Nigam Limited (GUVNL), the off-taker of power in the state, filed a petition in the Gujarat Electricity Regulatory Commission (GERC) last week asking the regulator to intervene and facilitate the re-negotiation of tariffs for the already-installed projects. The petition has been listed for hearing on July 23, 2013.

The GUVNL has signed at least 88 contracts amounting to a total solar power generation of nearly 970 MW. It includes developers like the Moser Baer India Ltd, Tata Power, the Welspun Energy.

As per the Power Purchase Agreement (PPA) signed between the GUVNL and the project developers, a feed-in-tariff of Rs 15 per unit for the first 12 years and Rs 5 per unit for the remaining 13 years was awarded. This averages out to Rs 12.54 per unit. The GUVNL claims it considered a capital cost of Rs 16.5 crore per MW to arrive at that figure. But most developers have set up their projects for a capital cost between Rs. 9 crore per MW and Rs. 12 crore per MW. The GUVNL says developers have made windfall gains and mislead the government, and that a ‘reasonable and prudent tariff’ should be around Rs 9 per unit.

Bridge To India, a Delhi-based consultancy firm on solar energy, said in a statement retrospective changes are not justified. The GUVNL should not have signed PPAs at the given tariff if it thought the assumed capital costs did not reflect the actual price point in the market, it said, adding the recent move would be detrimental to investor confidence.