Amphibians at risk even from low pesticide concentrations 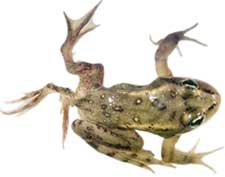 amphibians are fast disappearing and at least one-third of the known species of frogs, toads, salamanders and caecilians, are endangered. Though climate change, pollution and disease have been usually blamed, strong evidence has emerged implicating pesticides for threatening reproduction and development in amphibians. Now, a team of scientists in the us says that even extremely low concentrations of widely used pesticides are harmful.

Led by Tyrone B Hayes of the University of California in Berkeley (font class='UCASE'>ucb), the scientists examined the effects of low concentrations (at 0.1 parts per billion, that farmers use) of pesticide mixture applied to cornfields. They studied nine agro chemicals (four herbicides, including the widely used atrazine, three insecticides and two fungicides) alone and in combinations. They also tested a commercial preparation containing 33 per cent atrazine.

The researchers said that frogs exposed to a mix of pesticides at concentrations used in agricultural fields suffer deadly infections. When tadpoles were exposed in laboratory experiments to each pesticide individually, four per cent, on an average, died before they developed into frogs. But when atrazine was mixed with eight other chemicals to mimic the pesticide combination applied in cornfields, 35 per cent died. And that, the researchers said, suggests the chemicals might be responsible, in part, for the global disappearance of amphibians.

The study reported frogs developing an array of health problems, including meningitis, because the chemicals suppressed their immune systems. They also took longer to develop from tadpoles to frogs, which reduces their chances of survival and likelihood of reproduction if they survived. The study was published in the online version of Environmental Health Perspectives on January 24, 2006.

"Given these adverse effects and the continued increase and use of pesticides in agriculture over the past 50 years, it is likely that pesticides have played and will continue to play a role in amphibian declines," said the researchers.