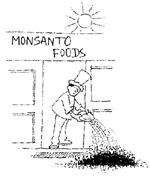 biotechnology giant Monsanto seems perpetually embroiled in controversies. While new research has revealed that the warm climates can affect the growth of Monsanto's herbicide-resistant soya beans, Granada Food Services, which runs the cafeteria at Monsanto's headquarters in London, has decided to remove all food that is genetically-modified (gm ) from the company's cafeteria.

Bill Vencill of the University of Georgia in Athens conducted a study on the effects of heat on engineered soya beans after farmers in Georgia complained of heavy unexpected crop losses during the hot spring weather. Says Vencill: "In the years we saw the problems, the soils were reaching 40 to 50 c. " He then monitored the growth of the soya beans in the laboratory at different temperatures. He found that the beans grew just as well as conventional beans when soil temperatures reached 25 c. But in warmer soils, the plant appeared stunted, especially when temperatures reached 45 c. "We saw lower heights, yields and weights in the Monsanto beans," he says. Reacting to gm food being removed from its cafeteria, Monsanto said that this was in response to widespread fears in Britain about the safety implications of the controversial technology.

Meanwhile, the Italian government has temporarily suspended the use of seven gm food products. A health ministry statement said that "following opinions from the Italian health institute and the health council, this precautionary step has been taken".