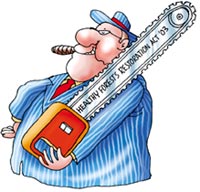 The us house of representatives has passed a controversial bill that will increase forest thinning on eight million hectares of federal lands. The step has been taken on the pretext of better management of federal lands to reduce the threat of wildfires. Critics argue this is a million-dollar giveaway to the timber industry.

Ironically, the bill is named the Healthy Forests Restoration Act of 2003. It was passed on May 20, 2003, by a vote of 256 to 170, with support from 42 Democrats. "This bill will save our national forests for future generations and protect today's communities from catastrophic forest fires," asserted Richard Pombo, a California Republican representative and chairperson of the house committee on resources.

Those opposing the proposed legislation contend that the bill unfairly and illegally excludes the public from forest management decisions, and gives a free rein to timber companies. They say it also falls far short of reducing the threat of wildfires because it does nothing to address the risks on private lands. Eighty-five per cent of the lands surrounding the communities considered most at risk from wildfires are in private hands.

The bill now goes to the senate committee on energy for consideration. Some House Democrats believe the bill stands little chance of becoming law. According to George Miller, a California Democrat representative, "The bill will be added to the heap of radical Republican legislation that moves out of the House, only to be ignored by cooler heads in the other body (the senate)."