IT WAS in 2001 that scientists in the US first identified the capability of brake fern, or Pteris vittata, to absorb large quantities of arsenic present in the soil or water. Since then biologists across the world have been trying to explore more about the role plant plays in absorbing heavy metals. 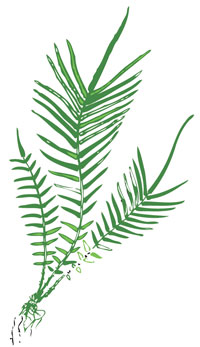 Now Indian ecotype of brake fern found in Kerala has been found to exhibit similar properties. A team of researchers from National Environmental Engineering Institute (NEERI) found that the fern could also help remove chromium from the soil and water. The study published in March 25 issue of Current Science says this particular ecotype of brake fern is found only in India.

For most of the developing countries, including India, brake fern plantation could help in reducing the expenditure required on mitigating heavy metal pollution using modern technologies.

To test the ability of the fern to absorb heavy metals, plantlets were grown in a nutrient medium enhanced with up to 200 mg of arsenic or chromium. The plant absorbed a significant amount of the heavy metals in their biomass.

The study also found that the highest arsenic accumulation in sporophytic plant (developed from spores) biomass was at concentration 150 mg arsenic per litre. The highest chromium accumulation was also at 150 mg chromium per litre. Increase in chromium concentration above 150 mg per litre resulted in bleaching and drying of leaves. “Another unique character of fern is its inherent property to propagate and accumulate high amounts of arsenic and chromium in both sporophytic and gametophytic (gamete producing stage) phases,” says Sarangi.

To dispose of the toxic metals accumulated inside the plan economically feasible methods such as land filling, drying under sun, composting, pressing, compacting and leaching could be used.

But Anand Kumar Srivastava, professor emeritus at Department of Botany, Chaudhary Charan Singh University in Meerut, points out that before deriving any conclusions and making it commercially feasible, the performance of fern needs to be tested across varied of geographical and ecological regions.