Empirical estimates of nitrous oxide levels in environment made 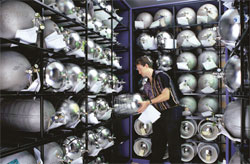 NITROUS oxide is a potent greenhouse gas—it is 300 times more powerful than carbon dioxide in causing global warming. Though it reaches the environment through different sources like sewage treatment, livestock, vehicles and industries, use of fertilisers in agriculture is its biggest contributor. For example, India which is predominantly an agricultural country is the second largest producer and consumer of nitrogen fertilisers in the world and the third largest emitter of nitrous oxide.

While scientists have attempted to measure the levels of nitrous oxide in the atmosphere mathematically, based on assumptions, empirical estimates are not available. Now scientists at the University of California in the US have filled this gap.

Using isotopic techniques they have ascertained agriculture’s contribution to nitrous oxide in the atmosphere over the years. For the study, they obtained air samples from compacted Antarctic ice, called firn air, dating between 1940 and 2005 and from an atmospheric monitoring station at Cape Grim in Tasmania which has archived air samples since 1978. The team then studied the percentage of different isotopes of nitrogen in the air samples. Isotopes are different forms of a chemical and nitrogen has two major isotopes N-14 and N-15.

“In the presence of fertilisers, nitrous oxide produced has more N-14 relative to N-15. Our data shows that over time the atmosphere is becoming enriched with N-14,” says Kristie Boering, co-author of the study. Previous studies have shown that the contribution of nitrification to global microbial nitrous oxide production has increased from 13.5 per cent in 1750 to 231.3 per cent in 2005. “As more nitrous oxides and its isotopes measurements are made in more regions we can use this data to monitor, check, and verify nitrous oxide emissions,” she adds.

The researchers in their study have also suggested that farmers should not use fertilisers during rainy season because microbes in wet soil can fire away loads of nitrous oxide. But is it feasible for countries like India?

B S Dwivedi, head of division of soil sciences and agricultural chemistry, Indian Agricultural Research Institute, Delhi, says, “Not using fertilisers during rain is not feasible for staples like rice which are grown in this season.”

Even though fertiliser use cannot be stopped completely, there are alternatives to reduce nitrous oxide emissions without losing crop productivity. Use of manure could be one option, but Dwivedi thinks it is only useful for low-yielding crops like spices.

Nitrification inhibitors are another option. Inhibitors are chemicals that slow down the process of nitrification and are being used in several parts of the world. However, Lars Bakken, group leader with the Nitrogen Group at the University of Life Sciences in Norway, says, “This is controversial for two reasons. One, you need to apply ‘poison’ to solve an environmental problem. Second, it does not work so well. Nitrification is only partly and transiently inhibited.”

O P Rupela, principal scientist at the International Crops Research Institute for the Semi-Arid Tropics in Hyderabad, says, “Much of the crop nutrient needs can be met through on-farm production of plant biomass.”

S R Gopikrishna of non-profit Greenpeace says ecological fertilisation could be the way out. “By including legume crops (which can fix atmospheric nitrogen) in the cropping system, emissions can be reduced.”

Suman Sahai, convenor of non-profit Gene Campaign that rallies for food and livelihood security, says that instead of focussing on reducing emissions from agriculture it would be better to reduce those from vehicles and industry.