Few steps away from disaster

Bird flu virus can be transmitted from humans to humans 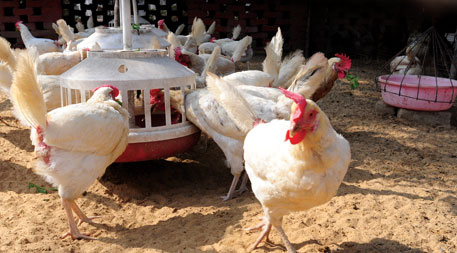 TILL now, it was thought that bird flu, or H5N1 avian flu, can be transmitted only from birds to birds or from birds to humans. But now there is a possibility of it spreading from humans to humans. Researchers engaged in two different studies have found that the virus is just five mutations away from gaining the ability to spread from one human to another. H5N1 bird flu has been circulating on and off since 1998, and has killed 357 of the 606 people reported infected, according to the World Health Organization. It mostly kills chickens and rarely infects people, but when it does, little can be done for the victims.

For his study, Ron Fouchier, a molecular virologist at Erasmus Medical Center in Holland, first analysed the mutations in the viruses that caused the great bird flu pandemics in the past century. He then genetically tweaked the virus at three places so that it can be transferred in mammals. The virus was then passed through nasal passages of ferrets—small furry domesticated mammals—repeatedly until it became transmissible. Fouchier found that healthy ferrets kept in adjacent cages also caught the infection.

It was also observed that the airborne virus showed at least five mutations (three originally induced by researchers and two achieved during passage to ferrets). “We show that only five to 10 mutations are necessary before H5N1 becomes transmissible by air,” Fouchier says. In an earlier study, Yoshihiro Kawaoka from University of Wisconsin Madison in the USÃ”Ã‡Ãªcreated a hybrid avian-human flu virus. The hybrid became transmissible after acquiring four mutations during passage in ferrets. Kawaoka’s work was published in Nature in May and Fouchier’s in Science in June.

But the road to get published was not easy. Biosafety experts had raised a number of concerns about the studies—the virus could escape the lab and contaminate other viruses in nature; malicious people could replicate the experiment to harm mankind. An advisory was issued by National Science Advisory Board for Biosecurity in the US, recommending Science and Nature, the journals that were slated to publish the studies, to withhold publication. A moratorium was applied on bird flu research by a group that consisted of the most prominent virology researchers worldwide.

But are humans under threat? “One must realise that these are not human studies. They were done in ferrets which are used as transmission models for bird flu in humans. But still ferrets are not humans,” says Shahid Jameel, virologist at International Centre for Genetic Engineering and Biotechnology in New Delhi. Fouchier further allays the fears. “There is nothing to worry. None of the ferrets died and they all responded well to antiviral drug oseltamivir”.

On how soon the mutations can happen, Jameel, says, “Mutations in viruses happen randomly. It is difficult to predict whether these mutations will happen in the next one year or 10 years or hundred years. But there is always a finite probability provided they have the opportunity to transmit better and outgrow the parent viruses.”