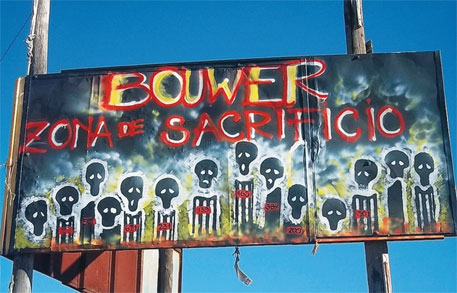 Towns usually celebrate their most characteristic aspect. So the town of Bouwer in central Argentina decided to “celebrate” garbage. However, the “first provincial festival of pollution and against discrimination” is not a reason for pride, but a mechanism of resistance by a town that wants to stop being “an area of environmental sacrifice” in the central province of Córdoba. For 28 years, Bouwer was the site of a garbage dump that accumulated, in nine different landfills without protective membranes, 12 million tonnes of waste from the capital and surrounding municipalities.

The exhibits in the festival, to be held on February 22, will feature artists’ versions of the dump, a nowclosed hazardous waste incinerator, a lead smelter whose open smokestack created health problems for local residents between 1984 and 2005, a shipment of 12 tonnes of DDT and other dangerous pesticides that arrived in 2005 but were removed after protests by the locals, and a pit containing toxic industrial waste.

There will also be asado con cuero (beef barbecued in its hide over an open fire, a traditional meal).