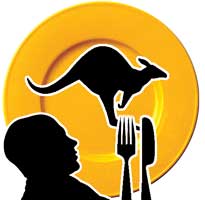 Melbourne has a well-earned reputation for being a gastronome's delight. That reputation is sure to be enhanced with the opening of Charcoal Lane, Australia's first aboriginal food restaurant.

Mission Australia, the non-profit behind the project, is used to running kitchens for the homeless. But in the Melbourne suburb of Fitzroy, pressed linen and polished silver was out for the launch of its latest project. "We see reconciliation through food," Paul Bird, the head of the charity, said. Damien Style, the head chef, said, "I will learn from indigenous Australians. We will have kangaroo on the menu." Charcoal Lane is named after a significant meeting place in Aboriginal history, also documented in rock star Archie Roach's 1999 song and album of the same name.