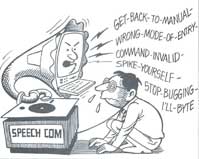 The computer keyboard is not only a secretary's bete noire -- continuous typing leads to what is called the repetitive strain injury, characterised by the numbing of various muscles of the hand -- but all programming also presupposes a knowledge of English.

Wishful though it may sound, if only computers could understand and speak your lay language, using them would be so much easier. In fact, some researchers have already made significant breakthroughs in giving computers the wherewithal to understand intelligible human sounds. Scientists at the Tata Institute of Fundamental Research (TIFR) in Bombay are designing a computer software that allows a computer to listen, comprehend and respond to queries in the colloquial Hindi usually encountered at railway reservation counters.

The "talking computer" is the outcome of the VOICE (Voice Oriented Interactive Computing Environment) project, funded jointly by the department of electronics and the United Nations Development Programme.

Says P V S Rao, head of TIFR's Computer Systems and Communication Group, "If we are to take computers to the villages, then I think the talking versions would be less intimidating than those that require typing. Apart from being user-friendly, microphone-and-loudspeaker-based terminals would be much more rugged, tolerant of dust and humidity, and significantly cheaper than keyboard and screen display terminals."

At present, the speech recognition system being developed by Rao and his colleagues just repeats the recognised message. The effort is limited to demonstrating the capabilities of the system and not to develop a complete speech understanding system that could interpret queries and take action. Eventually, however, it should be able to understand and respond to queries.

A database of 500 sentences in Hindi has been prepared, of which 200 have been categorised into sensitive acoustic classes that a computer can synthesise. The sentences were constructed from a vocabulary of 207 words frequently used during railway reservation enquiries. The software synthesiser accepts a sequence of features such as frequency, amplitude and pitch of the spoken word and converts them into speech.