Faced with the century's worst recession Helsinki has had to cut back heavily on development aid. At stake are several international environmental projects. 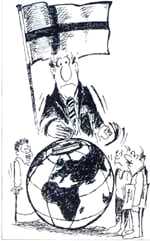 APRIL 1992: The Finnish government decides to slash its development budget from 0.76 per cent of its GNP in 1991 to 0.4 per cent for the period 1991--95. JUNE 1992: In Rio, Finnish foreign minister Paavo Vayrynen says, "We fully share the view that all developed countries should reach the 0.7 per cent official development aid target by the year 2000." Later, at the World Bank-International Monetary Fund meeting in Washington, a similar commitment is made on behalf of all the Nordic countries.

Double standards these may be, but the Finnish government seems to have little choice trapped as it is in the country's worst recession this century. The development aid cuts are part of a crisis package to curb public spending and it could result in a total saving of about FIM 5 billion (US$ 1 billion). But the money crunch has not deterred Helsinki from buying US$ 3 million worth of jet fighter aircraft from USA.

Hardest hit by the Finnish decision will be the UN humanitarian aid agencies, who together received more than US$ 125 million in 1991, but can expect only about US$ 15 million in 1993, a cut of almost 80 per cent. UN secretary general Boutros Boutros-Ghali deplored the Finnish decision and said in a letter to Finnish Prime Minister Esko Aho it would send a "negative signal" to other countries. UNDP deputy assistant administrator Jean-Jacques Graisse told Finnish officials the trimming of aid is the biggest single setback in international development cooperation since the Rio summit in June.

Finnish NGOs, however, are reportedly gearing up to demonstrate against the cutbacks and push for the percentage-movement, a soon-to-be-launched scheme under which Finns will be encouraged to donate 1 per cent of their salary to NGO-based development projects. The NGOs will also demand that the aid budget be set at the 0.7 per cent level at the earliest.

Environmental awareness, which had gradually been gaining ground in Finnish development assistance programmes, has been hit badly by the government's belt-tightening exercise. In 1991, the Finnish International Development Agency (FINNIDA) spent nearly US$ 43 million for environmental protection and promotion of sustainable use of natural resources. In 1992, this expenditure is estimated to drop to well below US$ 40 million.

Several international environmental projects, in which FINNIDA plays a key role, face being scrapped, among them the Zambian Forestry Action Plan, the Mtwara-Lind rural development programme in Tanzania and a number of forestry and agroforestry projects in Mozambique. According to FINNIDA general-director Benjamin Bassin, his organisation has already prioritised some environmental projects within the limited possibilities open to it.