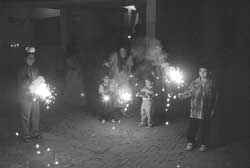 the Delhi high court has banned the use of firecrackers and loudspeakers in the National Capital Territory of Delhi unless a special permission is taken. Their use is going to be regulated even during religious festivals.

The decision has been taken in response to a public interest litigation (PIL) filed by the Free Legal Aid Cell and Sugan Chand Aggarwal, a lawyer. According to the petitioners, the use of firecrackers and loudspeakers affect the health of the city's residents. Blaring sounds have known to cause mental distress, high cholesterol, heart attacks, neurological problems, birth defects and abortion. "The provision of free speech makes it necessary that a little leeway is given, but this should not give people the right to play loud music till midnight," says Rajeev Dhavan, director of Public Interest Support and Research Centre, a New Delhi-based non-governmental organisation. The court has directed both the city and the Union government to formulate adequate legislation on this issue. The rules should cover noisy manufacturing machines, horns of vehicles, loudspeakers and firecrackers.

According to the court, the Central Pollution Control Board should ensure that the existing standards of noise pollution are adhered. Presently, noise pollution comes under the purview of the Noise Pollution (regulation and control) Rules of the Environment (protection) Act of 1986. But experts opine that these rules are not very effective in controlling the problem.