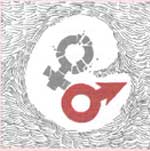 While scientists have long known that all mammalian embryos have the basic female attributes -- uterus, fallopian tube and vagina -- what triggers some of them to change their sexual identity 30-45 days following conception was a mystery.

Now scientists know how. Michael Weiss and his colleagues at the University of Chicago have isolated a gene called SRY which when switched on turns the embryo on the path to malehood. It also has an accomplice, called MIS, which erases all traces of femininity. So between them, they decide our sexual destiny.

In a paper to be published in the journal Science, Weiss says that solving this puzzle on a molecular level could lead to a new understanding of the often-erratic behaviour of genes in the embryonic stage. It is these changes, scientists surmise, that eventually lead to organ differentiation -- or even to cancer.

The sexual fate of mammals is decided by the chromosome of the sperm. If the chromosomal pairing is is XX, the embryo continues to be female. But if its XY, the SRY gene is switched on, eventually leading to maleness.