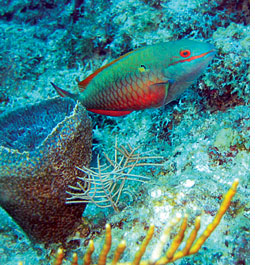 CORAL reefs are a major part of the coastal economy. Fishermen harvest corals for ornamental trade. But, reefs are at risk and there is very little data on what factors put them in the high-risk category. Listing some of the possibilities, Naveen Namboodiri, post-doctoral fellow at Ashoka Trust for Research in Ecology and Environment in Bangalore, said, "Pollution is the biggest threat followed by coral mining and overfishing."

Researchers Deron Burkepile and Mark Hay at the Georgia Institute of Technology, usa, studied overfishing to find ways to reduce risk to coral reefs. The idea was to isolate a key factor that could help improve coral health even under environmental stress. For this, they studied the endangered Caribbean corals at the National Undersea Research Center in Key Largo, Florida.

The study involved two key herbivorous fish species--parrotfish and surgeonfish--that help maintain the health of the Caribbean corals. These feed on seaweeds that are harmful if present in large quantities. Different varieties of seaweeds have different fish predators. A balance exists between fish and corals, but overfishing has disturbed it, the researchers said. The Caribbean corals lack the species diversity of other coral reefs and are therefore more dependent on particular fish varieties for survival.

The researchers used parrotfish (Sparisoma aurofrenatum) and surgeonfish (Acanthurus bahianus), singly and in combination, on coral reefs in cages. They found that presence of the fish led to reduction in seaweeds, enhancing coral growth. While the parrotfish preferred taller weeds, the surgeonfish ate species that the parrotfish disliked. This showed that a right mix of these fish is optimal for healthy coral growth. Conservation efforts can concentrate on maintaining the highest impact species by allowing harvest of only less critical ones, leading to faster recovery of corals, said the study. It was published in the October 21 issue of Proceedings of the National Academy of Sciences.

"There is paucity of baseline data on Indian coral reefs," said Namboodiri. "While such studies are very useful, one must not forget that the best way to preserve corals is by letting the ecosystem regenerate on its own," he added.