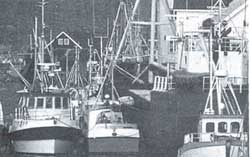 Fish wars are brewing all over the globe. The year began with French fisherfolk protesting violently against cheap imports from the US, Russia and eastern Europe. The French government pulled out all the stops to pacify the fisherfolk, who had given vent to their frustration by burning down the country's parliament building in Rennes. To prop up plunging fish prices in the country, the government pressurised the European Community (EC) into extending until mid-May the minimum prices for imported fish.

On May 15, however, the Community effected a new regime. This allows regional associations to raise prices to 10 per cent over the Community's reference price, but only if the increase applies to both EC and imported fish Financial Times. France also had to agree to higher tonnages of special quota fish for the processing industry, which are imported under tariffs as low as 0 to 6 per cent.