Fish on the front burner 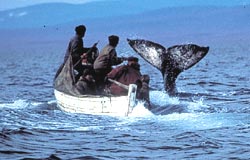 the African elephant is vying for space with the Patagonian toothfish -- albeit in the media and in politically surcharged discussions -- as Chile plays host to the 12th conference of parties (cop-12) of the Convention on Illegal Trade in Endangered Species (cites). The conference, being held from November 3 to 15 promises to turn into an iniquitous battle between trade interests, conservation rationales and notions on sustainable development. The right to compensation for people affected by conservation policies too has finally found its way into the agenda, though in a much convoluted form.

In a rare display of near unanimity and solidarity, African countries have demanded the reopening of trade in African ivory stocks (see box: A continent and a mammoth).

But the focus this time around is not only on charismatic megafauna, such as elephants and rhinos. Arc lights are shining on numerous fish species too. Fishing is a much bigger business than the trades in ivory and rhino horns and is governed by many multilateral agreements at times. So the fact that cites plans to stick its nose into the subject is likely to raise political hackles.

Japan and Norway's pitch to open up trade in minke and Bryde's whales is likely to be hotly debated. Even as Australia is seeking to list Patagonian toothfish in Appendix ii, the us is demanding the same status for the humphead wrasse (an over-fished species found in coral reefs throughout the Indo-Pacific region).

But notably, in the case of plants, many member countries to the convention have realised the futility of including more than 25,000 species in the three lists. Proposals for delisting several plants are on the agenda. The us wants artificially propagated hybrid orchids to be removed from appendix ii. But critics smell a rat here. They say that even as the us could profit from trading in hybrids it has developed, it is being hypocritical by insisting that sustainable trade of other orchid species (like those in India) remain restricted. Guatemala and Nicaragua have, on the other hand, submitted a proposal to include select populations of bigleaf mahogany in Appendix ii. The us is the biggest importer of this plant species.

The cop is also witnessing heated deliberations on policies that aim to encourage the use of economic incentives at the domestic level. The Indian and Russian delegations have already placed some reservations on the issue though agreeing to it in principle. As deliberations carry on and a 'consensus' emerges, this cites meeting is sure to conform to the core of all global environmental negotiations, trade and business. Watch this space.