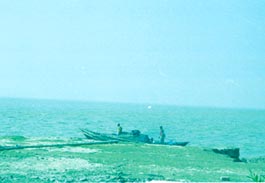 for more than five decades, fisherfolk from the estuary of Hooghly river in West Bengal have used the uninhabited island of Jambudwip as a seasonal fishing camp. Today, a complex legal wrangle threatens to jeopardise their livelihood. The Central Empowered Committee (cec), constituted by the Supreme Court (sc) has observed that fishing operations in the 20-square-kilometre island are non-forest activities. As per its recommendation, such activities should not be allowed without the Union government's permission. The cec was formed on the basis of a May 9, 2002 sc directive. Its role was to provide advice in the Godavarman vs Union of India case, also referred to as the 'forest case'. Jambudwip was declared a reserve forest in 1943.

The recommendations were put forth by a cec team that visited the island in December 2002 in response to an application filed by the Wildlife Protection Society of India (wpsi), a New Delhi-based non-governmental organisation. wpsi had raised the issue of encroachments by fisherfolk. If the apex court accepts cec's suggestion, the fisherfolk would be unable to use the island without the permission of Union ministry of environment and forests (moef). Three out of the five members of cec are from the moef. For fisherfolk, the disturbing fact is that the state's forest and fisheries departments are at loggerheads.

The matter is essentially about the customary rights of fisherfolk. They have been coming to Jambudwip from nearby islands during the fishing season (October to February). They use the isle as a temporary camp. The most indisputable evidence of this activity is a study by Bikash Raychaudhuri from the the Anthropological Survey of India. Raychaudhuri lived on the island through the entire fishing season of 1967-1968. His book The Moon and Net: Study of a Transient Community of Fishermen at Jambudwip was published in 1980.

However, the cec endorses the forest department's view that Jambudwip was an uninhabited island since 1943 and "there are no recorded rights of any person or fisherfolk in the area". The fisherfolk, on the other hand, have receipts of boat tax and permits for seasonal fishing, dating back to 1978 -- well before the Forest Conservation Act of 1980 came into force. Raychaudhuri told Down To Earth that such permits were issued in 1967 as well.

The fisherfolk contend that the law permits them the right of passage. They allege that the forest department has traditionally under-reported the number of people going to the island seasonally.

Harekrishna Debnath from the Kakdwip chapter of the National Fish Workers' Forum (nff) disputes the department's claim that the permits were for fishing only, not for drying fish on the island. "We have a receipt that clearly mentions that the permit is to use the island."

wpsi claims that in recent years the fisherfolk have started staying on the island throughout the year, causing damage to the forests. Those supporting the fishing communities point out that the encroachments that wpsi and cec talk about have nothing to do with the fisherfolk. According to Debnath, the forest department is confusing the encroachments' issue with that of customary rights. "The cec is also giving legitimacy to their claims," says Debnath. Those supporting the fisherfolk cite an agreement between the state and industrial group Sahara India Parivar to launch an ecotourism project in the Sundarbans. This, they fear, would not benefit the local people at all.

Can the fisherfolk be relocated? The forest department has proposed an alternative site for them at the Haribhanga Island. For the fisherfolk, moving to Haribhanga could be a case of 'out of the frying pan into the fire'. Several foresters and researchers have argued that Haribhanga should be part of a marine national park. If this campaign is successful, fisherfolk are likely to be ousted again. Debnath says that the forest department is also aware of the campaign.

"They know their livelihood is at risk, if the mangrove forests are destroyed. In fact they have more stake in the forest's health than conservationists and foresters," avers Debnath. Chandrika Sharma of the International Collective in Support of Fishworkers in Chennai opines: "The forest department should show willingness to find an amicable solution and avoid a confrontation with the fisherfolk." The nff has asked the fishworkers collective to study the issue and find a way out that is acceptable to all parties.