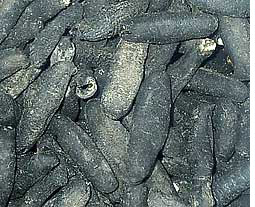 a delegation of fisherfolk representatives met Prime Minister Manmohan Singh in September. Top on their agenda was a demand to lift a ban imposed in 1982 by the Union Ministry of Environment and Forests on fishing sea cucumbers smaller than 75 mm in length. The delegation also wanted the revocation of a 2001 ban on the trade in sea cucumbers.

The prime minister promised them a committee to look into the matter. If the proposed committee begins work in right earnest--as of now there is no indication that it will be constituted at all--chances are it will find itself somewhat at sea, over sea cucumber numbers that is. There is no data on the population of this creature to support the ministry's argument that its numbers are dwindling, invoked to support the ban. Word has it that the environment and forests ministry once claimed to have conducted a population study sometime before 2002. Appukuttan, a mollusc specialist formerly with the Central Marine Fisheries Research Institute (cmfri), has heard rumours to this effect. But all efforts by Down To Earth to get the ministry to confirm or deny this proved futile.

Data on fishing is also elusive. Information on how much is caught by traditional divers and how many sea cucumbers end up getting trapped in trawl nets depends on whom you ask. Sudarshan Rodriguez, a marine biologist enquiring into environmental issues after the 2004 tsunami, says trawlers account for most of the catch--it is a by-catch, meaning sea cucumbers get caught in nets meant to catch other fish. Traditional divers can collect only a limited number because they have to come up for air. But D B James, a retired marine biologist who has studied sea cucumbers at cmfri, says divers are responsible for 90 per cent of the catch.

The confusion doesn't end here. Trade data is also very hard to find. un' s Food and Agriculture Organization (fao) has data for one year and that too for one variety. The patchy information tells us India has traditionally exported sea cucumbers, mostly to Singapore.

The fao report does say that their numbers have dwindled due to habitat degradation and overexploitation. Some fisherfolk dispute this. They claim sea cucumbers breed fast, though scientists have a different take. K Venkataraman, a coral reef expert with the National Biodiversity Authority, and James assert that sea cucumbers take about five years to grow in the wild. It is only under artificial conditions that they breed rapidly.

Though there is no data to support the claim that sea cucumber numbers are declining, James thinks that the 1982 order was not as preposterous as it seems. "A diver can easily spot an adult. They are about two-and-half times larger than juveniles, and are different in colour and texture," he reasons. He says that the 1982 rules did not work but remains a supporter of the restrictions they imposed. In 2001, the ministry notified sea cucumbers as a Schedule 1 species, implying a ban in trading of the species. B C Choudhury of Wildlife Institute of India insists that population is no criterion for a Schedule 1 listing. Populations are divided into classes such as juveniles and adults, if all classes are not well-represented, then the species is in trouble, he says.

Six years after the ban, James believes sea cucumber population has recovered to an extent. But did the ban work? "We caught sea cucumbers, anyhow," Thomas Kocherry of the National Fishworkers Forum lets on.