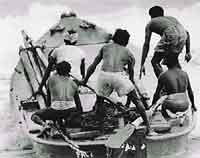 it's a battle between small fry and the big fish. Fisherfolk from 32 countries have launched a global forum to fight the fishing industry, aquaculture and marine pollution, which have affected their livelihood. Launched at the end of a five-day meet at New Delhi on November 21, the World Forum of Fish Harvesters and Fish Workers ( wff ) aims to "protect, defend and strengthen" fishing communities all over the world.

About 100 million people across the world depend on fishing for their livelihood. "Issues before developing and developed nations are not similar, but resources are under threat worldwide," said noted Canadian trade unionist Earle McCurdy, who is one of the coordinators of the wff . "The North is privatising fish resources. Fisherfolk are struggling to save their livelihood as resources decline." In developing nations, the poor are marginalised when big business interests step in. wff coordinator from South Africa Andrew Wilfred Johnson noted with emotion that many of his colleagues have died as a result of industrial "gangsterism".

The idea of wff was mooted at Quebec at the golden jubilee celebrations of the Food and Agriculture Organisation ( fao ) in 1995. Fisherfolk are the only occupational group who did not have a world forum. As a result, fish resources have been over-exploited. In Canada, the cod has been annihilated, and salmon stocks are declining. The fao 's 1995 and 1996 reports have noted that fisheries are undergoing the most serious crisis ever recorded. Seventy-five per cent of the resources are under threat. The Law of the Seas (1984) and Code of Conduct for Responsible Fisheries (1995) mandate urgent action.

However, the remedies prescribed often work against fisherfolk. Arthur Bogason, chairperson of the National Union of Small Boat Owners, Iceland, said that big industries buy up shares meant for small-time fisherfolk and monopolise the trade. Anti-trawling activist Angela Sanfilippo from Massachusetts, usa , said that as many as 360 trawlers are allowed to harvest fish in an area which is closed to fisherfolk.

At the inauguration of the meet, Union home minister Inderjit Gupta said that concerted action at the global level was required to check over-exploitation of resources. The Indian government set up some controls on the fishing industry after a strike by the National Fishworkers' Federation in 1996. A bill seeking to free industrial aquaculture from the checks imposed by coastal regulation and lifting of the court ban is pending before Parliament.

In a move reflecting dedication to the fishworkers' movement, wff convenor Thomas Kocherry refused the prestigious Pew fellowship, worth us $150,000 (Rs 55 lakh). The award is given by the Pew Foundation, set up by the owners of the Sun Oil Company, one of the largest polluters in the us .