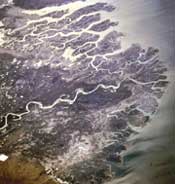 factoring in ocean colour data in the remote sensing technique used for fishery forecasts can vastly improve the reliability of prediction as well as the fish catch, claim Indian scientists.

Satellite-based forecasts usually rely only on sea surface temperature data. The method's reliability is just 50 per cent, though it increases yields by 40-50 per cent. Sea surface temperature data has two limitations. First, it can be remotely gauged only to a depth of less than a millimetre, failing to give a correct picture of the nutrient concentrations on which fish populations depend. Second, even modest surface winds or water current can distort the picture.

In comparison, the new technique devised by a team of scientists from the Space Applications Centre (sac) in Ahmedabad, and the Fishery Survey of India, Mumbai, has 70-90 per cent reliability and can enhance the yield 2-3 times. This is because ocean colour sensors (for chlorophyll) can detect signals far below (few tens of metres) the surface to gauge favourable conditions for fish breeding and aggregation, said the scientists led by R M Dwivedi of sac. The findings appeared in the December issue of the Indian Journal of Marine Sciences (Vol 34, No 4). The technique can considerably reduce the fishing pressure on coastal waters, they add.

Experiments showed the new technique improved the benefit-to-cost ratio of fishing for mechanised boats from 1.27 to 2.12 and for smaller boats from 1.3 to 2.14. In terms of profit, this would mean an increase from about 25 per cent now to more than 100 per cent.scientists have discovered evidence suggesting that the western Himalayan rivers (passing through Punjab) flowed east into the Ganga until five million years ago when the rising Himalaya diverted them westward into the Indus.

Geologists Peter D Clift from the University of Aberdeen in the uk andJerzy Blusztajn from Woods Hole Oceanographic Institution, Woods Hole, us used sediment samples from scientific and industrial drilling sites in the Arabian Sea to reconstruct the changes in the sediments brought by the Indus over the past 30 million years ago. They studied an element called neodymium in the sediments.

The study revealed that the main source of the Indus sediments was the Karokoram range until five million years ago; after that, the river began to receive more sediments from Himalayan sources. The researchers proposed that this change was caused by a rerouting of the major rivers of Punjab (Sutlej, Ravi, Chenab and Jhelum) into the Indus, which until five million years ago flowed east into the Ganga and finally to Bay of Bengal. The study was published in Nature (Vol 438, No 7070, December 15, 2005).