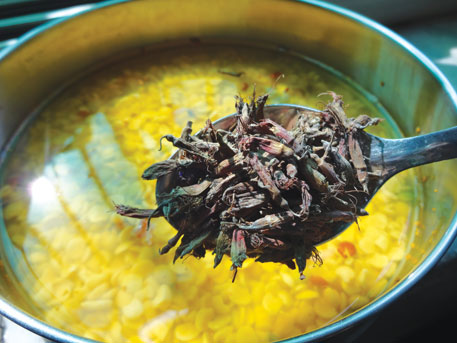 During a recent visit to a traditional healer’s meet in Bhopal, I came across a cluster of women busily sifting through some dried mulch. When asked, healer Sarojini Goyal said, “We are going to add this to today’s daal.”

The women were picking out dried flowers of Woodfordia fruticosa, a flowering bush that is on the International Union for Conservation of Nature’s (IUCN’s) red list of endangered species.

Tribal and rural people in Chhattisgarh call the therapeutic ingredient dhawai phool and use it in daal to keep common health problems, such as constipation, indigestion, menstrual disorders and headaches of unknown origin, at bay. It has a slightly sour flavour and adds a reddish tinge to the daal.

In older times, people regularly consumed the flower during winters. But now, with the bush growing rare, healers have started stocking them. “We just ask patients to have it with daal once in two-three days,” says Sarojini.

The flower’s medical properties have been recognised in Ayurveda and modern medicine. The Ayurvedic Pharmacopoeia of India, which is published by the health and family welfare ministry, recommends the herb in treating acute diarrhoea, haemorrhage, ulceration and erysipelas (skin infection). A powder or paste of the dried flower, known as dawi or santha in Sanskrit, is recommended for treating wounds. Traditional healers use small doses of the flower for stimulating the central nervous system. Its high tannin content makes it useful in disorders of the mucus membrane.

Modern medical research attributes useful pharmacological properties to this flower. A paper published by Pratap K Das of the Indian Institute of Chemical Biology and others in 2007 in the Journal of Ethnopharmacology, says it contains “a wide range of chemical compounds including tannins (especially those of macrocyclic hydrolysable class), flavonoids, anthraquinone glycosides, and polyphenols”. Another paper by Vikas Sharma of Sher-E-Kashmir University of Agricultural Sciences and Technology of Kashmir, published in 2011 in the Journal of Society of Applied Biotechnology, found extracts of the flower to have in-vitro cytotoxicity against two human cancer cell lines.

The plant is endemic to India, found across the country. It belongs to the Lythraceae family that includes economically important plants such as henna and pomegranate and grows in degraded and waste lands.

While I could not taste the daal during the event, I got a bag of dried flowers from Goyal. “Don’t overdo it,” she cautioned. “Just a teaspoon of flowers in daal once in two or three days.” Turns out she is right. The Ayurvedic Pharmacopoeia of India says that large doses have a depressing effect on the central nervous system.