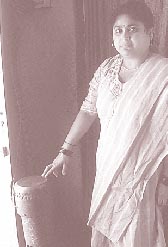 in march 1998, Usha Rani, a 45-year-old resident of Mahavir Enclave in Delhi, was diagnosed with skeletal fluorosis. Tests revealed that the fluoride content in her blood and urine was 10 times higher than the acceptable limits. "Even today, I cannot stand for more than one hour," says Rani.

Fluorosis, an irreversible disease of the bone and teeth, is slowly spreading its tentacles in the National Capital Region ( ncr ). According to A K Susheela, programme director at the Fluorosis Rural Research and Development Foundation, high levels of fluoride are present in almost 50 per cent of Delhi's groundwater.

According to a public notification by the Central Groundwater Authority, ( cgwa ), fluoride levels are 3 to 4 times higher than the desirable limit of 1 ppm in areas such as Palam, Pragati Vihar, Nizammudin, Rajouri Garden and Sant Nagar. "It is important for the people to know that the water they consume daily meets the drinking standards," says D K Chaddha, chairperson, Central Groundwater Authority. Doctors feel that fluorosis is still in its initial stages in Delhi. But it is bound to worsen in 10-15 years, if it is not checked today, says Geetanjali Kapoor, a former dental surgeon at the All India Institute of Medical Sciences ( aiims ), Delhi.

Despite evidence of excess intake of fluoride in Delhi, the authorities concerned have made almost no efforts to regularly monitor water quality in fluoride-prone areas or identify alternate sources of drinking water for the people. According to Poonam Sharma, a scientist at Delhi's cgwa , the problem of fluorosis is not alarming in Delhi. Asked whether preventive measures were being taken by cgwa, she said: "Volunteers can get their water samples checked for fluoride levels by the mobile water monitoring vans."

But the patients in Delhi have a very different story to tell. No one from the government has ever come to their area to inform them or analyse their drinking water.