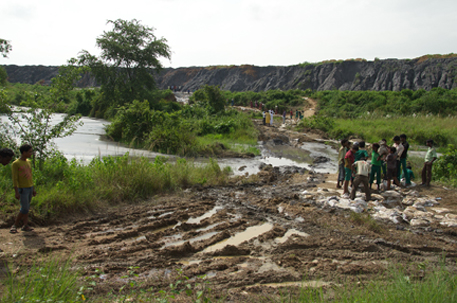 In the past fortnight, the fly ash pond next to the Hindalco aluminium plant in Odisha's Sambalpur district has breached its retaining wall twice. Though it is called an ash pond, the site is more like a mound of fly ash, rising to a height of about 25 metres. The toxic fly ash from the captive power unit of the plant is dumped at this site, less than 100 metres away from the Hirakud reservoir. The site is barely 150 metres from the irrigation canal that conveys reservoir water to farms and three towns in the district. The breach, which occurred twice at the same place, has destroyed agricultural land adjacent to the plant and has contaminated water in the irrigation canal.

Activists say the breach is a result of neglect and that the state authorities are colluding with the company which has a poor track record. Though the Odisha state pollution control board (SPCB) has slapped a closure notice on the plant, it has refrained from taking strong action, saying the breach occurred due to excessive rains.

The first breach took place on August 6, following which Hindalco placed sand filled gunny sacks on the broken part of the bund meant to contain the fly ash. On August 16, these sacks also gave way under pressure of fly ash mixed with water. Two days ago, the state pollution control board issued closure notice to the plant. But the thermal plant, comprising four units, is still operational, the regional office of the pollution board informed Down To Earth. The order is yet to be implemented because of holidays, said officials. SPCB officials visited the plant premises on August 16 and 17.

Hindalco's power plant generates about 3,000 tonnes of fly ash each day, of which 1,000 tonnes is sent to cement plants. The remaining is dumped in the ash pond.

Siddhanta Das, member secretary of Odisha SPCB, said Hindalco had pleaded for more time to find alternatives for fly ash disposal. “But looking at the damage, we felt the thermal power plant should be gradually shut down. We are not convinced of the viability of the alternate site the company is promising to use (for disposal) as we have not inspected it,” said Das.

On August 21, Hindalco officials met SPCB officials with an action plan to dispose of the fly ash in the areas adjacent to the existing dump site. But Das said that the board has already initiated the process of shutting down the power plant. “We do not want the fly ash to enter the water system,” he said, while adding that the board will allow transfer of fly ash to the proposed site only after third party verification. “We have to see whether the area that the company is proposing is feasible or not. Therefore, we have contacted the IITs of Roorkee and Chennai to verify the company claims,” said Das.

He added that the plant cannot be completely shut down as it would lead to serious hazardous waste contamination. The aluminium smelters use fluorine compounds and if the power is not supplied to the smelters, solidification will take place, he explained. “The chemicals thus released cannot be disposed of and are hazardous in nature,” he said. He added the company has been told to use power 80 MW power from the grid to keep the smelters running at the minimum required capacity.

The current breach has led to fly ash mixed with water flooding 12 to 20 hectares of paddy fields, said Ranjan Panda, convenor of non-profit Water Initiatives Odisha. A team from the NGO visited the affected areas on August 20. Panda said the breach has affected farms in over 4,000 ha because the Sambalpur distributary canal is polluted as well. 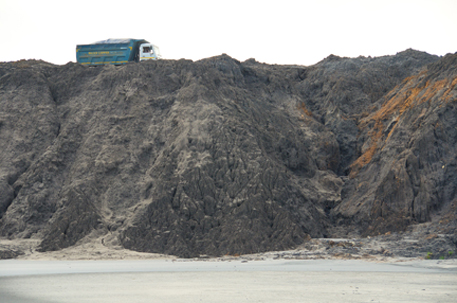 The state irrigation department has, meanwhile, filed a police complaint against the company for polluting the canal and reservoir. The canal provides drinking water to three towns—Hirakud, Burla and Sambalpur.    Farmers are, meanwhile, protesting the damage. This is not the first time they have protested against Hindalco.

Das said Hindalco is proposing to buy the contaminated land from the farmers, though farmers deny this.

While SPCB officials claimed that the company has a good track record and this is the first breach of the stored fly ash, facts show this is not the first time the company has failed to check contamination from the plant premises. Between 2000 and 2012, there have been five incidents of fluoride contamination; excess gas had leaked out and burnt the paddy fields around the plant. Hindalco is known to exploit norms, not just in Odisha but in Uttar Pradesh and Chhatisgarh as well.

Santosh Telenga, a farmer and local leader said that between 2000 and 2012, there have been five incidents of leakage from the plant, though this is the first that the ash pond has breached the bund. Though SPCB claims the ash pond in well maintained, Telenga said this is not true. “The fly ash covers about 25 ha; in the past ten years a few attempts have been made to plant trees in barely 1.2 ha,” he said. The retaining wall is just three metres high and there is no plastic lining to stop leachate from contaminating groundwater, he said.

The farmers have been seeking a permanent solution to the problems created by the plant. “No one listens to us and it seems the authorities are hand-in-glove with the company because the company repeatedly violates environmental norms and the authorities do not even punish them,” said Telenga.