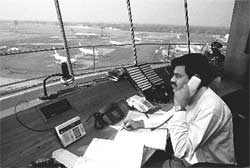 the mid-air collision over Charkhi Dadri near Delhi might not have taken place if the Saudia and Kazakhstan Airlines had been using a Traffic Alert Collision Avoidance System (tcas). tcas or Airborne Collision Avoidance System (acas) is the air-to-air communication system that issues audio-visual warnings to the pilots whenever two or more aircraft come very close. If the warnings are received in time, pilots can manoeuvre the aircraft to safety. According to International Airport Authority of India officials, the system may soon become mandatory for all airlines operating around the world.

Government or international agencies such as International Civil Aviation Organisation (icao) allot specific air routes to the airlines. To prevent collisions on this route, Air Traffic Controllers (atcs) on ground provide information for necessary separation between aircraft flying on the same routes. However, there is always a possibility of a mid-air collision if any of the safety measures are not followed.

In such cases, tcas may track aircraft and display them on the screen. The system is completely independent of ground-based equipment. A transponder on-board an aircraft transmits radio-signals to the another aircraft fitted with the same device. It helps pilots communicate with each other during emergencies. The difference in time taken to transmit and receive a message allows calculation of the distance. The information in terms of distance and altitude is displayed visually on a screen in the cockpit.

tcas is so sophisticated that the audio-visual warnings known as Traffic Advisories (ta) offer the pilot enough time to manoeuvre the aircraft safely. The ta range is normally six nautical miles (nearly 10 km) or 1200 of altitude. The orientation of an arrow on the screen indicates whether an aircraft is climbing, descending or maintaining level.

The aircraft is indicated by a solid yellow circle, followed by aural warning "Traffic Traffic", when it is 20 to 48 seconds from the Closest Point of Approach (cpa) -- the minimum separation between both two aircraft.

There are various versions of tcas , the most recent one being version iv. This is designed to meet the operational requirement of Free Flight and Future Navigational Systems (fans). It could also include Global Positioning System -- a network of satellites that provides accurate position on land and air with reference to latitude and longitude. The cost of acas can be very high depending on the design and facilities provided. acas - i costs us $80,000 whereas acas - ii is priced at us $150,000.

The Director-General of Civil Aviation (dgca) in India has planned to make it mandatory for all airline operators to get their aircraft equipped with tcas . According to the notification, passenger aircraft with a seating capacity of more than 30 seats, should be equipped with acas - ii by the end of 1998.