Flying with a laptop 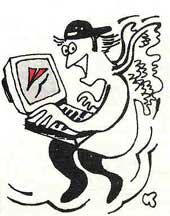 THANKS to Steve Casner, a research scientist at the National Aeronautics and Space Administration's (NASA) Ames research centre at Mountain View, California, us, aspiring pilots can now learn to fly advanced commercial aircrafts by using nothing more than a laptop computer.

Casner's basic idea was to simulate the programme found in most of the advanced aircrafts' flight management softwares, which allows one to switch an aircraft to an 'autopilot' mode. Casner's programme tapes the flight management system of an automated glass cockpit and enables the pilots to programme their own learning materials and exercises.

The software programme features five windows: a control/display unit, mode control panel, two digital maps to show the horizontal and vertical tracks of the craft, and a flight mode enunciator displaying which flight system (there is a choice of more than 10 packages, graded according to the flying experience of the learner and difficulty of the test flight) is currently controlling the craft.

In addition, there is a section to the right of control/display unit for inputting text and carrying on a conversation with the learners. The software incorporates audio, video and several film clips to illustrate various flight sequences.

Thus, it is basically an electronic tutor that supports and teaches the pilots. Casner added, "Because of the decreasing size and the increasing power of small computers, we are able to incorporate a tremendous amount of information into a small package", and the program has an added advantage of being an 'anytime, anywhere' feature.

., Reflecting a new trend in NASA research, where more and more technical studies are being used in the aviation industry, Casner's programme is being tested at present. He had demonstrated it to major commercial airline carriers and many of them, including a few foreign carriers, have expressed interest in it.

Casner plans to create a training programme for university students who are studying to become professional pilots, next. As most of the future pilots in the us come through a rigorous four-year course on aviation in the universities, Casner feels that it is imperative that they know through simulations of real life situations what to expect when they climb into a cockpit for the first time. Casner, also, plans to author a textbook and an accompanying CD ROM to make the programme available to a broad population.