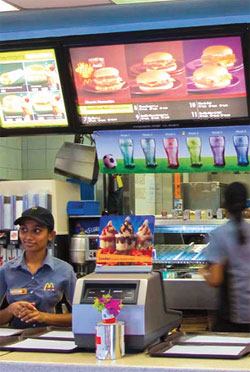 NEXT time you have a craving for french fries opt for barbecued potatoes and vegetable fingers. This could keep you and your brain fit.

It is known that junk food is responsible for obesity and increasing waistline. A research has shown that eating too much junk food or food rich in trans fat can shrink the brain as the Alzheimer’s disease does.

The study was conducted by the department of neurology at Oregon Health and Sciences University in Portland, the US. The researchers analysed 104 people, aged 65 and above, who had enrolled in the Oregon Brain Aging Study in 1989. The objective was to study the relationship between nutrient status and the effect of age on dementia.

The study found that there was no brain shrinkage if the diet was rich in vitamin B, C, D and E. It also improved thinking abilities. Those with high levels of vitamins and omega-3 fatty acids in their blood were also found to have better performed during mental alertness tests. “On the other hand, high trans fat was associated with less favorable cognitive functions and total cerebral brain volume,” says Gene Bowman, co-author of the study published in Neurology.

Trans fat is known to reduce the amount of good cholesterol and increase the risk of breast cancer and infertility in women along with diabetes. Though the fat is naturally found in dairy and meat products, it is also consumed through use of vegetable oil or vanaspati in India.

“Most of the information on adverse effects of trans fatty acids is based on findings of animal studies. This study throws light on effect on human brain,” says Seema Gulati of National Diabetes Obesity and Cholesterol Foundation, a research and advocacy organisation.

While Bowman’s study focuses on older age group, the impacts of junk food and trans fatty acids can strike in early fetal life as well. “Adverse fatty acid supplies during fetal and child development can alter fatty acid composition of membrane phospholipids (a group of fatty acid compounds occurring in living cells that impact fat content of the child) and storage triglycerides (they store unused calories of humans.

The lower the better),” says Gulati. This can lead to disruption in cellular environments, structure and function,” she adds.

Gulati notes that avoiding hydrogenated fats is also important for the growing brains of children as it can lead to attention deficit hyperactive disorder, a developmental disorder characterised by the co-existence of attention problems and hyperactivity.