Should Karnataka expand the midday meal scheme without fine-tuning it? 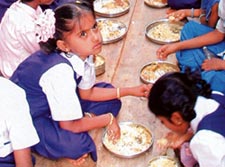 • An inspection team of the Karnataka government pays a surprise visit to Thottadhagudathahalli primary school, located on the outskirts of Bangalore, and detects discrepancies in the rice and oil stocks meant for students' meals.

• Less than 2 kilometres away, at the Sidedahalli government primary school, 45 students and two teachers share space with sacks of rice and bags of vegetables in a cramped room. The open verandah serves as a makeshift kitchen.

These two instances typify the unappetising state of the midday meal scheme (mms) for children studying in government and government-aided primary schools of Karnataka. Rather than devising a corrective plan, local authorities are set to dish out more of the insipid fare by bringing the higher primary section (up to viith standard) within the programme's ambit from the next academic year.

To its credit, the state government has tided over teething troubles that it encountered when mms was introduced in Karnataka. But the larger issues of infrastructure and implementation remain unresolved.

The scheme, called Akshara Dasoha locally, covered seven districts of northeast Karnataka in the initial stage. It was launched in the state in compliance with the Supreme Court directive of November 28, 2001. As per the order, children in state-run primary schools were to be given a prepared midday meal for a minimum of 200 days in a year. The apex court also prescribed the nutrition amounts: at least 300 calories, and 8-12 grammes of protein each day of school. In July 2003, the Karnataka government extended mms to the rest of the state.

From the outset flaws have shown up in the programme. In July, more than 250 students -- mostly in the northern districts -- fell ill after consuming midday meals served under the scheme. Subsequent to a review meeting in Bangalore, chief secretary B S Patil reportedly gave an assurance that steps would be taken to weed out the shortcomings in the scheme.
Currently, the state government has earmarked an annual sum of Rs 200 crore to provide "hot, cooked meals" to 44 lakh children of classes i to v in government schools. Additionally, 3 kilogrammes (kg) per month of rice is given to each student of 2,269 aided schools.

While the Union government supplies rice and wheat free of cost through the Food Corporation of India, the state authorities give pulses, salt, oil, vegetables and fuel. "This arrangement," claim mms officials, "enhances efficiency." Under the scheme, the Karnataka government's budget per student is Re 1. Out of this, 0.20 paise are spent on vegetables, 0.20 paise on cooking fuel, and 0.60 paise on pulses, oil and salt.

The state government also provides up to Rs 5,500 per kitchen centre for buying utensils and other utilities. Each panchayat is expected to build a kitchen centre out of funds from schemes such as the Jawahar Rozgar Yojana.
mms smacks of complete centralisation in its present form. Though there is mention of the need to involve panchayats , the scheme is actually implemented by the district commissioner (dc) along with mms officials posted in the area. The village bodies' role is limited to a token presence in the school development monitoring committee. In effect, panchayats do not have a say in any matter except construction of kitchen centres. Even on this front, the target has not been met. The mms department estimates that about 38,000 kitchen centres are required in the state. However, only 4,400 have been built.

Devolution is also absent in the procurement of grains and pulses. Consequently, individual districts cannot take into consideration the availability of locally supplied grains. For example, north Karnataka grows and consumes more of jowar (sorghum) whereas south Karnataka prefers ragi (finger millet). Yet jowar and ragi are only bought when there is a surplus in the state. B H Anil Kumar, commissioner in the state's food, civil supplies and consumer affairs department, explains: "In Karnataka, the production of ragi is not commensurate with the consumption." It is also a fact that cultivating paddy and horticultural crops is a more lucrative proposition for farmers.

Kamala, who supervises a midday meal programme being executed by the Bangalore chapter of the International Society for Krishna Consciousness (iskcon), hints at a change in consumption patterns due to the wide availability of rice. " Ragi is not relished by students any longer," she points out. It may be noted that ragi is not just more nutritious than rice, it also doesn't require intensive irrigation. mms department officials emphasise that they have suggested the inclusion of different varieties of grains and pulses in the meals. "But preparing ragi balls on such a large scale will be tough," avers G Chandrasekhar, joint director, mms.


What then should the authorities do to get their act together? "For starters, non-governmental organisations (ngos) should be allowed to coordinate and implement the programme," feels Revanna Siddhiah, adviser to the Karnataka government on mms. The iskcon scheme best illustrates how ngos are better placed to deliver the goods. Compared to the government's allocation of Re 1 per child per day, it spends Rs 6 per child per day. Not surprisingly, the meal provided by the voluntary group is tastier and more wholesome. Despite the stark contrast, all the ngos cater to less than 1.5 lakh children.

A food and civil supplies department official says candidly: "The entire system can be decentralised. The procurement process should be put out to tender by dcs. This would even give them the choice to select grains other than rice and wheat in accordance with local requirements." Ramaniammal, the sole medical officer attached to mms in Karnataka, reveals: "We have issued instructions to all the kitchen centres to make a variety of foods and use locally available vegetables." Sadly, such directions are hardly being followed.

The centralised approach has been applied to cooking, too. "We have experimented with the concept, but it is not feasible because of the high transport costs," asserts Abdul Rawoof, senior assistant director, mms.


In Karnataka, there have been quite a few precursors of mms. The ngo Cooperative for Assistance and Relief Everywhere was among the first to launch such a programme. It supplied uppitu (a sooji or semolina preparation) to primary school students. This was followed by a couple of energy food schemes sponsored by the state government. Then there is the programme under which rice is supplied to children at Rs 3 per kg every month.

According to a study initiated by the New Delhi-based Centre for Equity Studies and conducted by economists Amartya Sen and Jean Dreze, the midday meal scheme has led to increased enrolment in schools. The research -- covering Karnataka, Rajasthan and Chhattisgarh -- pertains to the period July 2001 to July 2002. During this time, school admissions rose by 14 per cent, with a particularly impressive jump of 19 per cent for girls. Significantly, the survey also notes that mms is being implemented more effectively in Karnataka than in most other states. Furthermore, official sources have reportedly stated that the seven districts under the North Karnataka Education Directorate witnessed a 5 per cent rise in attendance rate during the academic year 2002-2003. The reduction in truancy levels followed the launch of mms.

These statistics strengthen the case for persisting with the programme. At the same time, the scheme needs to be given that extra bite before its scope is widened further.