Vitamin B12 andfolic acid promise a worldfi-ee of Alzheimer's disease 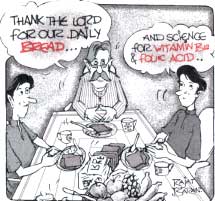 CHANGES in diet could help prevent the onset of Alzheimer's disease, says a new study. Boosting the intake of vitamin B12 and folate could help you keep this dreaded neurological disorder at bay.

An Oxford University-based team of international experts began the Optima project in 1988 to study ageing and its impacts on the brain. Annual blood samples and brain scans from hundreds of patients have been analysed in the search for clues to the causes of Alzheimer's, the commonest form of dementia.

Analysis of the blood samples has revealed that patients with blood levels of vitamin B12 in the lower third of the normal range were over four times as likely to succumb to Alzheimer's, while those with low folate levels were three times as likely.

This prompted the researchers to seek a common link between diet and Alzheimer's. Levels of homocysteine, a potentially harmful amino acid - a chemically simple substance which proteins are composed of were highest in people lacking normal levels of vitamin B12 and folates. Those with levels of homocysteine in the top third of the normal range were at least 4.5 times as likely to develop Alzheimer's disease (Archives of Neurology, Vol 55, p 1449).

The findings may increase pressure on governments to follow the US, Canada and others and demand that folic acid supplements because added to staples like bread.

David Smith of Oxford University and head of the Optima project, has some doubts. "Trial would have to be done in the elderly first," he says. High doses of folic acid can induce health problems, including anaemia. It is possible that differences in vitamin B12, folates and homocysteine were a consequence of Alzheimer's disease, rather than a cause, Smith adds.

However, if differences were due to patients with Alzheimer's disease failing to eat a proper diet, then the Optima team should have found declining levels of vitamin B12 and folates as the disease progressed, says researcher John Scott of Trinity Coflege in Dublin, Ireland. Levels remained constant - supporting the idea that they were a cause of the disease indeed.

Further evidence for the dietary link may come in from 3,700 elderly people taking part in a study being conducted in Norway since 1992. This particular study aims to investigate the role of homocysteine and vitamins in various heart disorders.