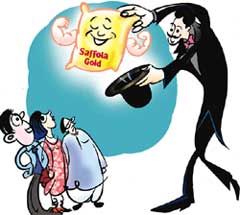 The Food Safety and Standards Bill, 2005 has termed 'nutraceuticals' a special category of 'food' and suggested that special rules need to be laid down for its sale in India. But the bill has just been tabled in Parliament; meanwhile, in the current prevention of food adulteration act, 1954 or the Drug and Cosmetic Act, 1940, there is no clear definition for such products (see 'The inside story', Down To Earth, February 15, 2005).

Such a lacuna leads precisely to what happened after Marico Ltd recently launched its new product, Saffola Cholesterol Control (scc), in Mumbai. The company claims ssc lowers blood cholesterol by about 15 per cent; its launch press release claims it is "100 per cent natural and enriched with the goodness of oats, barley, soy and fibre...important for controlling cholesterol.... Consumption of Saffola Cholesterol Control is definitely a viable option to control cholesterol. The product does not change the taste of home cooked rotis in any way. It can also be added to other atta (flour) preparations...".

Then controversy erupted. Marico Ltd had not taken the Drug Controller General of India's (dgci) permission for their product. M Venkateswarulu, deputy drug controller general (west zone) pointed out if scc is capable of reducing blood cholesterol levels, as claimed, then it should be classified as a "drug" having therapeutic values, and so require clearance under dca. M Rameshkumar, commissioner, Food and Drug Administration, Maharashtra, is looking into the controversy. He says, "We have informed Marico about our objections towards the labelling of their product which boldly says Cholesterol Control. A food product cannot make such claims. Marico has agreed to change the labelling, and taken the product off the market. If the company fails to make suitable changes we will issue it a show cause notice."

The company's tall therapeutic claims are based on a study on only 49 people, conducted more than two years ago by the department of pharmacology and therapeutics, King Edward Memorial Hospital (kem), Mumbai. It was recently published in the August issue of The Indian Practitioner. Explains Nirmala N Rege, who conducted the study, "The opd- level clinical trial was done over 3 months. Sample consisted of people who did not have a very high blood lipid levels. Their dietary history was recorded and final selection was done in consultation with cardiology department. Patients were divided into two groups -- one was fed atta with scc and other was given normal atta. In three months we recorded a decrease in blood lipid level of the first group. After three months when this group was again given normal attassc's launch, as her department's task was to do only a pilot study. But Marico should have done similar studies in other parts of the country to validate the kem study, she adds.