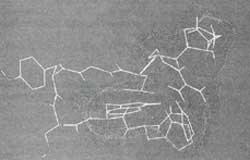 DESIGNING vaccines has never been an easy task. Vaccines are modified disease-causing viruses or bacteria that provoke the body's defences to knock out them out with antibodies. Now, using the vaccine principle, Indian scientists have been able to simulate a similar effect with hormones.

D M Salunke and his colleagues at the structural biology unit of Delhi's National Institute of Immunology (NII) have mastered the art of designing molecules that are similar to the body's hormones, but just different enough to elicit a response from its antibodies.

Using a computerised database of protein structures, the NII scientists elucidated a 3-dimensional structure of the gonadotropin releasing hormone (GnRH), which controls the entire reproductive process, and predicted its behaviour. The scientists then set out to rationally design an analogue of the hormone to be used as a vaccine.

The GnRH is made up of 10 amino molecules arranged in a certain sequence, which folds into a specific 3D structure. The structure determines its GnRH's functions. While designing its vaccine version, the scientists had to hit on an analogue of the hormone and attach to it a carrier molecule that would induce an antibody response.

Delving into their computer library once again, the scientists picked up several proteins with similar amino acid sequences and used them to build a model of the GnRH, which was then refined by rigorous computational procedures. Salunke's team was able to clearly identify the sites where the carrier molecules could be added to induce the antibody response without disturbing its structural integrity. Based on this information, various GnRH analogues have been synthesised and their potential as a GnRH vaccine has been tested at NII.

The novel computational approach that has been developed at NII for modelling the structure of GnRH, says Salunke, can be applied to other molecules as well. The method has been used to analyse the structure of several other hormones associated with reproductive processes. For example, Salunke and his team have arrived at the structural basis of human choriogonadotropin, a pregnancy hormone that regulates secretion of prolactin, a hormone that plays a critical role in the development and maintenance of mammary glands.