The US proposes tighter emission norms for vehicles 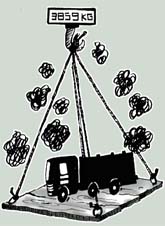 the us Environmental Protection Agency ( epa) has said that trucks, passenger vans and sport utility vehicles ( suv s) over 3,859 kg must slash their toxic emissions by over 90 per cent within 10 years.

The epa 's proposal calls for the reduction in smog-causing nitrogen oxides and particulate matter, or soot, from the heaviest suv s , by 2007. "In addition to cutting emission from heavy duty trucks, it would close any possible loopholes for the new, super-large suv s now being built by ensuring that they also meet strict emission standards," said epa administrator Carol Browner. "As a result, Americans can have both cleaner air and the consumer choices they want in motor vehicles," she added. The epa is proposing new engine standards beginning in 2004 for vehicles over 3,859 kg. It also requires gasoline-powered trucks to be 78 per cent cleaner and diesel trucks to be 40 per cent cleaner than today's models. The epa hopes this will reduce 55,000 tonnes of particulate matter per year.

Smog and particulate matter in the us account for 15,000 premature deaths, one million cases of respiratory problems, 400,000 cases of asthma attacks and thousands of aggravated asthmas, especially in children, according to the epa . Motor vehicles generate nearly one-third of all emissions of nitrogen oxides and volatile organic compounds -- the pollution that causes smog. Environmentalists applauded the new epa restrictions but urged regulators to accelerate the 2007 cleanup timetable.

"It's very encouraging that the epa is taking up the problem of big diesel trucks," said Frank O'Donnell, executive director of the Clean Air Trust. "But they could do it faster." The trucking industry said the new federal air standards would be expensive and difficult to follow under the proposed timeline.

"Combining actions with Tier ii will require re-engineering virtually every car and truck Ford makes in a period of a couple of years, when most are already low emission vehicles that meet consumer needs," said Kelly Brown, director of vehicle environmental engineering. Trucking is a us $372 billion industry in the us , making up 81 per cent of the nation's freight bill, according to Bob Costello, economist at the American Trucking Association.