For the gentle giant 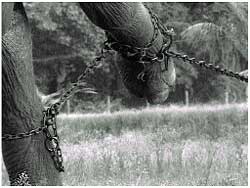 There was a time when more than 350 species of the elephant roamed the Earth. Hunted down for ivory and bludgeoned into domestication, only two species survive today. In Kerala, where elephants are part of a number of religious rituals, the male female ratio of these animals is a perilous 1:40. The film under review is a gruesome expose of humankind's brutality towards the gentle giant.

The 18th Elephant derives much of its force from its narrative style: in an unusual break from the classic style of documentary, three elephants present a litany of their woes. Their tone is accusatory and angry. The protagonists deride the hypocritical attitude of humans towards elephants: the gentle giants are revered but also drugged and tortured into submission as mascots of religious institutions and tourism syndicates. There are also images of the the frenetic trading in the animals at the annual cattle fair in Sonepur, Bihar.

Though the film's script slackens sometimes, the powerful visuals work on the viewer. Images of the animal being tranquilised during it's musth period, an injured tusker dragged about by earth movers, people hacking the ivory from a dead tusker and elephants crammed into tiny enclosures poke at the viewer's conscience.

That is precisely the objective of the film maker, K P Balan. "We do not want to be controversial. Our film is intended to make people look at themselves and elephants differently. After all, the earth is not just for humankind," he says. The film, which took three years to make, was shot in Kerala, Karnataka and Bihar. It has also been feted, both nationally and internationally. But awards are not what Balan is after. He has shown the film in educational institutions in different parts of Kerala. "The response has been quite encouraging," he says optimistically.