For those dead...and alive 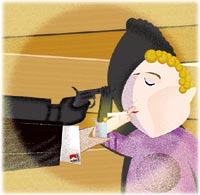 The biggest tobacco trial till date began in the us on September 21, 2004, in which the government has filed a us $280 billion civil suit against tobacco giants, charging them with concealing, for decades, the harmful effects of smoking and for illegally marketing cigarettes to children. Apart from recovering the money from the accused, the lawsuit is also aimed at formulating stricter tobacco legislation. It was filed by the Clinton administration in 1999. Frank Marine, a lawyer of the us justice department, said the case "is about a 50-year pattern of misrepresentation, half-truths and lies".

The accused include Philip Morris usa (makers of Marlboro) and its parent Altria Group, RJ Reynolds Tobacco, Brown & Williamson Tobacco, British American Tobacco (Investments), Lorillard Tobacco, Liggett Group, Council for Tobacco Research- usa and the Tobacco Institute. The government has alleged that to combat the growing scientific evidence against smoking, the tobacco industry launched a secret campaign in New York in December 1953. It created the Tobacco Industry Research Committee and the Centre for Indoor Air Research to spread confusion about tobacco's link with diseases. The government has also charged the industry with exploiting the addictive properties of nicotine to increase customers.