Unless affordable technology is provided to the fisherfolk, the survival of Lake Victoria in Kenya will remain under threat 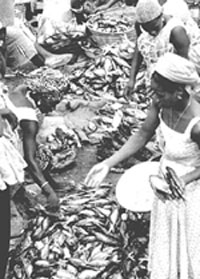 unemployment , poverty, lack of capital and lax enforcement of laws are to blame for the poisoning of fish in Lake Victoria, environmental experts in Kenya say. The practice, which led to a ban on fish imports from Lake Victoria by the European Union, has jeopardised the country's us $109,375 annual trade in fish. Kinya Munyirwa, a programme officer with the Kisumu-based non-governmental organisation Osienala (Friends of Lake Victoria), says lake communities have resorted to cheap but destructive methods because fishing gear is too expensive. "To get good returns, one needs hooks, nets, a boat and an engine, all valued at around us $3,125. Those who do not use motorised boats need close to us $468, far beyond the reach of many in a country whose Gross Domestic Product ( gdp ) per capita is us $280," Munyirwa said. In contrast, those who poison fish need only us $3 or less to catch us $234 worth of fish per day. Those using legal methods earn an average of us $62 a day. Says 23-year old school dropout Idi Alamin: "I have spent close to us $156 to buy my nets. Many fisherfolk can't afford that kind of money, so they resort to methods which the government does not want."

Moses Ikiara, an environmental economist at the School of Environmental Studies at Moi University blames pressure from middlepersons who control the industry and lack of incentives for fisherfolk to use appropriate methods for the rise in fish poisoning. "In any case, they have already lost control over the destiny of their resource to the rich," says Ikiara, adding that the influx of migrants into the sector has also had a negative impact. According to 'Rich Fisheries, Poor Fisherfolk,' a publication of the World Conservation Union, the export-oriented fishing industry has led to competition among traditional fisherfolk who cannot afford resource-friendly technologies. Whereas in the past, the fisherfolk sold most of their fish to fishmongers, the factories now take a larger share of the catch, severing the relationship between the fisherman and the fishmonger.

The fisherfolk are under contract to deliver to the agents of the factories, who pay them higher prices than the local markets. The government of Kenya's 1995 policy objectives for fisheries are the generation of employment opportunities through fishing and fish processing; increasing per capita fish consumption through production of low-cost, high-protein fish; enhancing the living conditions of the fisherfolk and maximising exports and foreign-exchange earnings. However, according to the union publication, implementation of the first three objectives conflict with the maximisation of foreign-exchange earning capacity. Ikiara says shared ownership and responsibility may change competitive behaviour. "The government ought to institute measures such as taxing the fish processing and animal feed firms and using the revenue to improve the fisheries sector and the welfare of fisherfolk. A gradual transfer of ownership of the fisheries to the fishing community will reduce open access to the lake and provide incentives for adoption of appropriate technology," he says, adding that laxity in enforcing existing regulations has compounded the use of destructive fishing methods. While fisheries officials blame fisherfolk for using illegal methods, fishing communities accuse fisheries officials of corruption.

James Okullu, a member of the Dunga Co-operative Fish Society in Kisumu, says: "Fish scouts who are supposed to monitor fishing activities in the lake have become ineffective because they accept bribes from the offenders." Ikiara concurs: "The institution mandated to manage, regulate and monitor the fishing industry in Kenya is poorly funded, corrupt and politically marginalised."

Fisheries scouts in the field say that much as they may try to enforce regulations, lack of guarantees for their security limits their capacity. According to the United Nations Environment Programme ( unep ) publication A Coast in Common , legislation to protect the marine environment exists in most countries of the East African region, but these laws are inadequately enforced. In Kenya, for example, the Fisheries Act prohibits fish poisoning, yet the law is broken every day even within reach of urban centres like Kisumu. "Fisherfolk found guilty of the offence are sentenced to a jail term not exceeding one year or a fine of us $312 or both," says Kariuk.