The UN Commission on Human Rights adopts a resolution that will have direct bearing on the controversial Narmada clam in Gujarat. 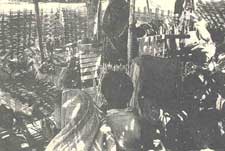 RESETTLEMENT of people against their will constitutes a "gross violation of human rights", according to a resolution adopted by the UN Commission on Human Rights at a recent meeting in Geneva.

The resolution was put together by groups led by Habitat International Coalition of Mexico. It applies to resettlement due to large-scale development projects as well as eviction of tenants, and directs the UN secretary general to compile a study on forced evictions for its consideration at its 1994 session.

The resolution was initially opposed by USA, which objected to the word "gross" and because of concern that it severely restricted the right of landlords to evict rentdefaulting tenants.

The Sardar Sarovar project in Gujarat which is funded by the World Bank, probably will be the first test of the resolution's impact because a decision is expected to be taken in May on continuation of the project. which has evoked widespread,40rotests within the country and abroad. The Canadian NGO Probe International estimates World Bank-funded projects will displace upto 1.5 million people, with another 1.5 million likely to be affected by projects which are still on the anvil.

According to the London office of the Panos Institute, an NGO, the worst displacement cases are the Kedung Ombo dam, Indonesia, 25,000 people; the Akasombo dam, Ghana, 80,000 p6ople, and the Cahora Bassa and Cariba projects, southern Africa, 75,000 people. In China, 10 million people have been displaced by 80,000 reservoirs since 1949, and a Chinese government official concedes, "only one-third of the resettlement effort in the past seems satisfactory".

People are often resettled to make way for development projects that supposedly w 'ill be to their benefit. Now governments will be pressed to explain that the displaced were not forced to leave their homes.