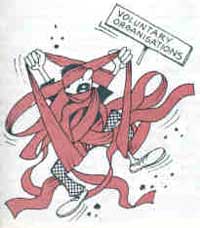 To pressurize the government to Implement the Task Force's recommendation has asked 500 vos to send to the Prime Minister's Ow), deputy chairman of the ig conunission, and secretary, V for rural development. VANI mambo have met B N Yugan- ingrairv. Puo, and have appealed Iwaawpt the recommendations. mo nVor that all these acts are km too Mrs old. Said Singh, and their work has has changed significant- ly over these years. Theefore, it is Important that national legislation is framed afresh.

The SRA 1860, present both legal And administrative difficulties at several Ages of society reotration and its Opertions from year to year.

vos claim that despite meeting all the formalities, they are refused registration on grounds that they are too new to be registered under the Act. Some claim that reasons for denial of registration are sometimes not given. The FCRA says foreign contributions should not be used by registered newspapers and rnagazines. But vos argue that there are many publications registered under the Press and Registration of Books Act , disseminating valuable information. Therefore, it is essential that their cases should be approved, if necessary, on a case to case basis.

The Force has proposed several modifications in the Income Tax Act, 1961, too, which exempts charita ble and religious organisations from income tax payment. According to vos, a distinction between charity and develop ment promotion needs to be recognised.

The Force has proa posed inclusion of a 21 new section in the rTA, providing for a unified taxation scheme of 0 charitable trusts. This r should be applicable to institutions of national importance involved in scientific research, rural development and natural resources conservation.

While vAwi is still waiting for.a feedback from the government, an opti- mistic Singh said, "The law should be simple and straightforward so that developmental agencies can work without any hindrance and defaulters should have no room for any lapse or excuses."