How the West is trying to steal what is ours 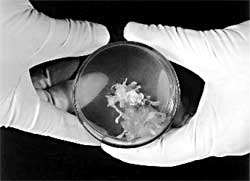 after basmati rice, it is the chickpea's turn. Western companies have made yet another attempt to put their brand names on a crop that Indian farmers have grown for generations.

Last year, Rice-Tech, a us -based company, after hijacking the "basmati" name - their rice was artfully christened "Texmati" - tried to expand it's export market in countries dominated by Indian exporters.

In May 1997, two Australian agricultural institutes, Western Australia, and Grains Research and Development Corporation applied for plant breeder's rights (pbr) on two varieties of chickpeas, both popular in India. They failed. But if they had succeeded, Indian farmers would have had to pay royalties to use the seeds of these chickpea varieties.

These instances have one significant common factor: both the us company and the Australian agricultural institutes had taken the rice and chickpeas germplasms from internationally-funded gene banks where these are stored. Since the advent of the 60's Green Revolution, scientists, working under the auspices of the Consultative Group on International Agricultural Research (cgiar), collected varieties of folk seeds and species of food crops from the developing countries. These are walled in the gene banks of the cgiar' s International Agricultural Research Centres (iarc) and are supposed to be held "in trust" for the international community. cgiar's mission is to increase the planet's food security. It is supposed to release these genetic materials only for research purposes, or in case of an emergency, when the original variety is wiped out.

But these organisations are not abiding by their mandate. The International Rice Research Institute in Philippines is one such organisation from where Rice Tech acquired the rice germplasm. The Australian agencies got their's from the International Crops Research Institute for the Semi-Arid Tropics (icrisat), Hyderabad - another cgiar affiliate. The chickpea was spared an Australian brand name only because the present director general of icrisat , Shawki Barghouti intervened in time. He sought diplomatic options and per-suaded the Australian government to reject the pbr applications. "These materials should not be available to private companies. Once they take over these seeds, they may deny them to others," he pointed out. "The Australian breeders had done little to improve these varieties. One of them, in fact, came directly from Andhra Pradesh," says Edward Hammond, of Rural Advancement Foundation International (rafi), a Canada-based non-governmental organisation which had con-tested the Australian institutes' claim. The Australians finally admitted that the varieties were obtained from an international research institute and dropped their claims. The chickpea case has finally been settled satisfactorily and the farmers need not fear about being left at the mercy of the foreign companies. But what about the future?

A debate currently rages worldwide on the issue of access to these inter-national gene banks. The forum is the United Nations Food and Agriculture Organisation (fao). It is the grouse of the developing nations that cgiar , in the guise of promoting conservation, is in fact, aiding the corporate sector in the developed nations to acquire genetic materials form the developing nations. Though these countries are the prime donors to the gene banks, their control over the crop resources stored in these banks has been systematically marginalised. cgiar is conveniently located in the World Bank where developed nations dominate. "The Northern gene banks and the iarc system together make up nearly three quarters of the world's ex situ agricultural germplasm reserves, and are, by and large, controlled by the interests of the developed nations," says a report published by Spain-based activist group Genetic Resources Action International (grain).

The chickpeas' case has once again driven home the message that the real victims of this lopsided practice are the farmers in the developing nations.