Forest fires aid in the spread of mercury in soil 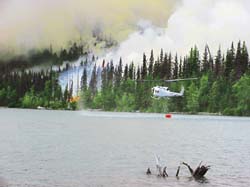 The study has crucial implications on forest fire management. "When fires run free in an area where they have been suppressed for a long time, they end up burning huge areas that have been accumulating mercury for a long time. So, a lot of mercury is released," says Abir Biswas, the lead author of the paper published online on January 9 in Global Biogeochemical Cycles. "Instead, if you allow fires to occur in natural 50-to 100-year cycles, you end up with more frequent and less severe fires, which release less mercury in the soil," says Biswas.

The researchers found that wildfires resulted in 62-66 per cent increase in mercury accumulation. But it largely depends on the intensity of the fire, type of forest and mercury in the foliage. The researchers collected forest soil over burnt and unburnt areas and estimated mercury and trace metals in them. Comparing the two, they found that the type of trees and the severity of the fire determined the amount of mercury released. The type of tree is important because evergreen trees take up more mercury from the atmosphere on their needles than broad-leafed trees, leading to more mercury accumulation in the soil prior to the fire.

Another paper published in the Proceedings of National Academy of Sciences (Vol 103, No 51) showed a five-fold increase in mercury accumulation by Oncorhynchus mykiss and smaller increases in the muscle of several fish species in Moab Lake in Alberta in Canada. The lake was a catchment area and had experienced a forest fire in its vicinity. The enhanced mercury accumulation was caused due to increased nutrient concentrations in the lake which in turn had enhanced productivity and restructured the food web.