Forest fires in Europe could increase by 200 per cent by 2090, says a study 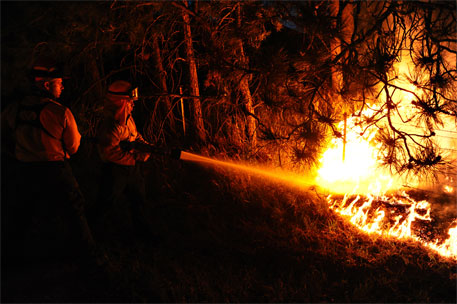 The research estimates that the potential increase in burned areas in Europe could increase by 200 per cent by 2090 because of the impacts of climate change, a new study from the International Institute for Applied System Analysis (IIASA) has found. The IIASA worked with the Joint Research Centre and national forest representatives in countries across the European Union.

The study talks of the two potential mitigation efforts to reduce the estimated increase – prescribed burns and improving fire fighting. According to the study, “the application of prescribed burnings has the potential to keep that increase below 50 per cent.” It says that improvements in fire suppression might reduce this impact even further. The study stresses that adaptation to climate change is increasingly becoming important for the world. It recommends more adaptation options for consideration, such as using agricultural fields as fire breaks and behavioural changes. Taking the example of Europe, the study points out that 95 percent European forest fires are caused by humans, including negligence and arson. In this regard, co-author of the study, Andrey Krasovskii adds, “In more populous areas, the change of occurrence of forest fires rises dramatically. We could prevent many of these fires simply by being more responsible.”

The study also observes that no realistic management strategy can completely offset the effects of climate change although best practices can significantly reduce the disaster.

Playing with fire: how climate change and development patterns are contributing to the soaring costs of western wildfires