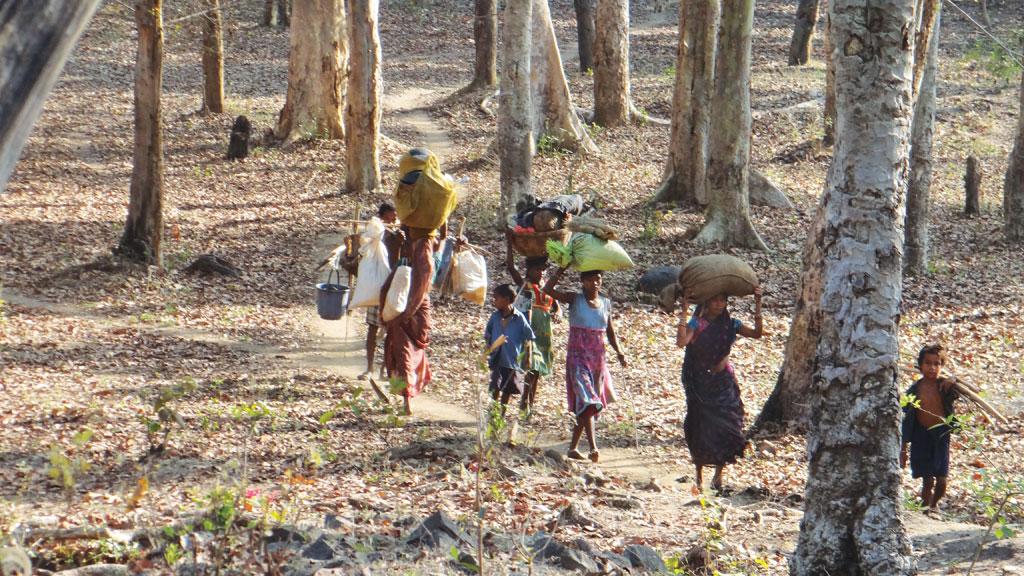 For more than five months, residents of Jabarra village have been foraging the forests for minor forest produce (MFP). The forest in Chhattisgarh’s Dhamtari district is abundant with more than 200 types of forest produce and the district is known as Asia’s biggest trading centre for MFP. The economy of the residents revolves around produce like tendu leaf and mahua flower more than it does around subsistence agriculture. But at a time when agriculture has failed due to a severe drought and the next harvest is still five months away, the forest is their only source of livelihood.

Every day, the residents spend almost eight hours in the forest collecting MFP and take stock of how much they have collected in the evenings. The drastic decline in their recent collections has left them overwhelmed. They have enough rice from the government food supply scheme, but that might not be sufficient to ensure wholesome food for all. More importantly, MFP brings precious cash which is needed for weddings, medical emergencies and even buying seeds for sowing paddy. With no MFP and no money, people are staring into an economic abyss.

Fifty-year-old Anjura Ram Sori, who belongs to the primitive Paharia tribe, has spent most of his life collecting MFP. “In April, I got the first ominous sign: there were no honey bees in the forest,” he says. This signalled the onset of a dreaded situation called the forest drought.

As the country was talking about the worst drought in recent years affecting agriculture in 10 states, forest dwellers were being dealt a double blow: first, the loss of crops and second, the disappearance of forest produce, their crucial buffer economy.

There is no official nomenclature for forest droughts in India, nor is there any official plan to deal with them. This means while a farmer can get compensation for failed crops, forest dwellers do not receive anything in compensation for their loss of income from MFP. Anjura adds, “Whether there is any relief from the government or not, when forests dry up, so do our lives.”

The Paharia tribe is the sole collector of honey in the region. In a normal year, they earn enough from selling 15-20 litres of honey to cover their cash-based transactions. This year, they simply could not find any beehives. Tiharu Ram Netam, a local MFP trader, says, “I usually buy 1,000 litres of honey from Jabarra. But this year, it’s just not there.”

People have also failed to collect the lucrative mahua flower and tendu leaf. Erratic weather affected flowering of the mahua during March-May, much like it affects crops in farms. When Down To Earth met Anjura and two other families coming out of the forest in the first week of April, they were carrying only three kilograms of mahua flowers, collected after spending eight days. “Unseasonal rains caused the flowers to drop early. They also caused the kharif crop to fail, due to which the number of people collecting mahua flowers increased,” explains Anjura.

At the same time, tendu leaf collection has also dipped in the state: only 21,150 bags of tendu leaves have been collected in Dhamtari against a target of 31,600. One bag consists of 1,000 bundles of the leaf and has a minimum support price of Rs 1,500.

Down To Earth tracked 10 drought-affected states and found that of the 254 districts affected by drought, 100 have significant forest cover and are inhabited by almost 100 million forest dwellers. And they seem to be losing their battle for survival.

Annually, MFP worth Rs 6,000 crore is traded in India. MFP contributes up to 40 per cent of the annual income of forest dwellers and is a source of food for 80 per cent of them.

It is clear that drought relief has focused entirely on the loss of crops and neglected the impacts on MFP. A recent survey in the six poorest districts of Odisha by non-profit Action Aid India shows that while the drought has wiped out income from agriculture, the dip in collection of MFP has made it worse. “There is a decline of 40 per cent in collection of MFP and this has led to scarcity of food during the rainy season when people collect edible tubers and leafy vegetables for consumption,” says Ghasiram Panda of Action Aid. Migration for work is also not an option as all construction and brick kiln activities halt during the monsoon.

In most parts of Nuapada district of Odisha, mahua and char collection has reduced this year. Some families have had to resort to taking private loans at an interest rate of 50 per cent to meet wedding expenses and other social responsibilities. Many other families have had to defer social obligations due to reducing incomes from forests. For instance, they have skipped kuna bera, a ceremony that involves marrying daughters to a mahua tree before they reach puberty.

Retired professor and social worker from Nuapada, Fanindam Deo, says a person with 20 mahua trees is better off financially in a drought-prone area than a farmer with two to three hectares of farmland. “But the policy and programmes of the government are paddy-centric, which keeps a large number of people out of drought management plans,” he says. 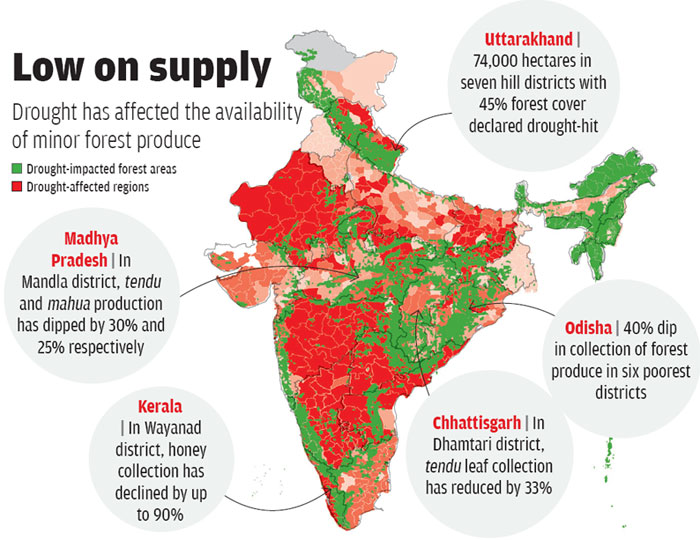 There is no mention of forest droughts in either the Crisis Management Plan for the current drought or the country’s Manual for Drought Management, even though most official committees set up to manage droughts have representation from the forest department.

An analysis of the Agriculture Contingency Plan of states and districts shows that even in states with significant forest cover and a high number of forest-dependent people, there is no policy on MFP.

According to the director of the National Institute of Disaster Management, Anil K Gupta, droughts experienced in forest areas have a direct impact on the hydrology of the region. “As droughts impact both forest and non-forest areas, there is no separate classification,” he adds, admitting that signs of a drought “first appear in forests”. Former rural development secretary at the Centre, N C Saxena, has stated the urgent need of bringing this source of livelihood into formal drought management plans in his paper on the economy of MFP. “Despite extreme fluctuations in production, the declaration of drought conditions is not linked to low production of MFP, though, in many places, almost half of the forest dwellers’ income is derived from forest produce,” he says.

A study by the Indo-Global Social Service Society (IGSSS) states that climate change, marked by long spells of drought and extreme rainfall in different parts of the country, has caused substantial impacts on forest ecosystems. This is causing shifts in vegetation types, phenology and reproductive biology of various trees, shrubs and herbaceous plant species.

R K Chaturvedi of Centre for Ecological Sciences at the Indian Institute of Science, Bengaluru, says in a forested area of 69 million hectares (ha), only 8.35 million ha is categorised as very dense forest. Here, climate impacts such as drought or extreme weather are not felt as severely as in other forests. He calls for restoring the diversity of forests. “As of now, more than 20 million ha of forest is monoculture and more than 28.8 million ha is fragmented (open forest) and has low tree density. Low tree density, low biodiversity status as well as higher levels of fragmentation contribute to the vulnerability of these forests,” he adds.

In 2011, the Indian Council of Forestry Research and Education (ICFRE) revisited different forest types. The mega study was carried out by 1,800 scientists for more than 18 months. “The study shows that forests in temperate region in the Himalayas, central and western India are turning xeric (devoid of moisture); forest vegetation is getting affected; and drier conditions are prevailing,” says V K Bahuguna, former director of ICFRE who led the survey. He blames the over-exploitation of MFP by people and the lack of foresight among foresters in planning afforestation programmes as reasons for the changes in forest vegetation and biodiversity.

The massive exercise has, however, come to naught. The report is gathering dust at ICFRE as successive governments have not taken it seriously. Meanwhile, communities rummage through their forests, hoping to find something that can sustain them in the coming months.

The story was published in the 16-31 July, 2016 issue of Down To Earth under the title 'A forest drought no one is talking about'