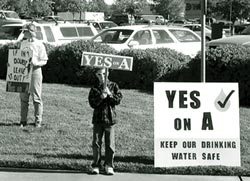 papers of the uk government recently leaked to the press exposed plans to fluoridate drinking water in England and Wales to reduce tooth decay. Experts and green groups allege that the government is proposing mass medication of a toxin. "In the us, where 65 per cent of the population are routinely subjected to fluoride, the worst tooth decay occurs...and when fluoridation was stopped in parts of Finland, East Germany, Cuba and Canada tooth decay decreased," reads an editorial of the Ecologist. But the uk government is adamant. Officials says: "Those opposed can use water filters or buy bottled drinking water."

The viability of fluoridating water has been much debated. In the us, fluoridation was introduced during the 1940s. At present, 140 million people in the us are being supplied water fluoridated with 200,000 tonnes of silicofluorides (sifs) annually. sifs are toxic waste products of the phosphate fertiliser industry and contain substances like arsenic, mercury and lead. A 1999 study by Roger D Masters, professor at Germany-based Dartmourth College, and Myron J Coplan, retired vice president of the us-based Albany International Corporation, associated increased lead levels in the blood of children with the addition of sifs in water. The researchers studied over 280,000 children and found those drinking fluoridated water were over twice as likely to have blood lead levels more than 10 microgrammes per decilitre -- the threshold of the World Health Organization. The study concluded that fluorosilicic acid and sodium silicofluorides -- the main constituents of sifs -- may be responsible for water becoming acidic; the acidic water leads to the leaching of lead from plumbing systems, and thus increases lead uptake. It also suggested that communities consuming sifs have high rates of learning disabilities and attention deficit disorder.

However, the us government refutes the findings. A paper by Edward T Urbansky and Michael R Schock of the us Environmental Protection Agency concludes: "...no credible evidence exists to show that water fluoridation has any quantitable effects on ... lead or lead compounds."

But studies conducted elsewhere prove the adverse effects. German research shows that sifs inhibit production of cholinesterase, an enzyme regulating neurotransmitters. "This means they have effects similar to chemical agents linked with Gulf War and chronic fatigue syndrome," says Masters. Paul Beeber of the New York State Coalition Opposed to Fluoridation says sifs have not been tested for safety in humans or animals, either alone or with other additives of water.