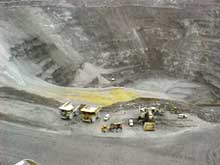 Rivers, estuaries and a national park, which is a world heritage site, in the West Papua province of Indonesia are being polluted by mining in the area, says the mining company's own risk-assessment report.

Freeport-McMoRan Copper and Gold Inc's report was leaked to an environment group, Walhi, or Friends of the Earth Indonesia. It disclosed that the company was dumping a billion tonnes of tailings -- mine waste -- into surrounding rivers, polluting forests and river systems with heavy metals such as copper and arsenic and endangering species. The report also claims the tailings were polluting the Lorentz National Park in the province.

"Freeport has known all along that their operation is endangering the environment but they haven't done anything," says Walhi spokesman Torry Kuswardono. The Freeport mine has long been accused of unfairly profiting from concessions given by the discredited and corrupt Suharto regime.

Indonesia's House of Representatives has also indicted Freeport on charges of pollution and lack of transparency.