Despite environment-friendly refrigerators making the grade, manufacturers are hesitant to introduce them commercially. 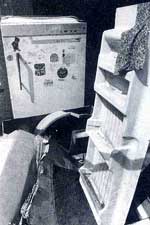 IT IS POSSIBLE today to make a CFC-free domestic refrigerator. Yet, eco-friendly fridges are not found on shop floors. As the 2000 AD, CFC-free, Montreal Protocal deadline approaches, reports from the European Chemical-makers Association show the European Community's (EC) refrigeration sector increased its CFC use by 4 per cent between 1989 and 1991. In principle, however, EC countries have agreed to cease CFC production by 1997.

Home refrigerators use CFC as a coolant and also for making foam insulation. While technical problems of using the CFC alternate, HFC-134a, as a coolant have been solved, just one domestic product in Britain -- a Danish-made chest freezer -- uses the substitute. London's Financial Times quotes Dorothy Mackenzie of the consultancy Dragon International, "The environmental performance (of refrigerators) comes low in the ranking of consumer decisions. This provides insufficient stimulus for manufacturers to risk the cost of launching a new and probably more expensive product."

The industry's resistance is already taking its toll. In Germany, DKK Scharfenstein's efforts to produce a CFC-free refrigerator met with stiff resistance with the company facing closure this month, until the environmental group Greenpeace campaigned to save it and its fridge, Green Freeze. Scharfenstein managed to get a temporary stay of execution from Germany's privatisation company Treuhand. Greenpeace, which is endorsing the fridge has gathered more than 43,000 advance orders.

Green Freeze uses a mix of propane and butane as its refrigerant, both of which do not worsen global warming or enlarge the hole in the ozone layer. The walls of the fridges however need to be slightly thicker because the insulation -- also CFC-free -- is not as effective as CFC-blown foam. The first fridges are expected in the market by April 1993 costing around UK pounds 250.

An equally efficient insulation foam is still to be produced. A propane-driven prototype with a carbon dioxide-blown foam substitute, commissioned by Greenpeace, has been produced by the Institute of Environmental Engineering in London. But manufacturers are reluctant to use it commercially as it would involve changes in design and extra cost -- HCF-134a being five times the price of CFC.

Greenpeace's British arm is also actively lobbying the government to abolish the ban against the use of hydrocarbons such as propane and butane in domestic refrigerators as these are considered inflammable. Propane and butane were used before the wonder chemical CFC was discovered. It is time now to go back to the past.